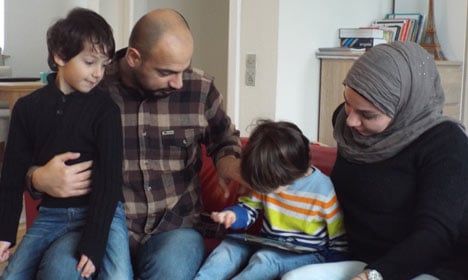 Mohamad Fattal, Dima Kurbash and their two children in their suburban Aarhus home. Photo: Michael Barrett
A cool evening breeze and a hard ground were the least of the problems faced by the Fattal family on their last night in Turkey. As their children slept on their stomachs to stay warm, Mohamad Fattal, 32, and Dima Kurbash, 27, lay awake in fear of being caught by the people smugglers they had fled from hours earlier.
The night before travelling to Europe by boat in September 2014, the family slept in the open countryside somewhere between the Turkish resort towns of Datçe and Marmaris. They were on the run.
“We had paid to go in a proper boat. A wooden one,” says mother-of-two Dima Kurbash. “But when we got to the beach, we saw that it was an inflatable with about 40-50 people waiting to get on. That’s really scary. So we fled from them.”
Not wanting to risk taking their children on the inflatable dinghy, Dima and her husband Mohamad decided to run – even though they had already agreed on the journey with a smuggler.
“You don’t pay until you get to Greece,” explains Mohamad. “That means that if you run away from them before you get on the boat, they come looking for you. They were angry, so we couldn’t go back to the place where we had been staying.”
The United Nations Refugee Agency (UNHCR) reported in December that over one million refugees and migrants travelled to Europe across the Mediterranean Sea, mainly to Greece and Italy, in 2015. Of these, 3,735 were reported missing and are believed drowned. A volunteer helps refugees on to the beach on the Greek island of Lesbos. Yannis Behrakis/Scanpix
The Fattal family’s journey to Denmark had started earlier that year when they left their home in Damascus and travelled to Lebanon, a country with a population of four million that is currently housing an estimated two million Syrian refugees. Mohamad, Dima and their children did not stay in Lebanon. They flew to Izmir in southwestern Turkey, before travelling to the coast to attempt the crossing to the Greek side of the Aegean Sea.
The night after their first aborted attempt, the family tried again to make the sea journey to Europe.
“After spending the night on the mountain we walked to the next town and took a bus to Marmaris. It was a rough night,” says Dima. “We were lucky. When we got there, we found some people who had a boat and offered to take us with them.”
Dima looks behind her at her children’s toys, arranged neatly on the floor behind the sofa in the family’s living room in suburban Aarhus as she recalls the details.
The family left the following night in a boat with 15 other people and made the two-hour sea crossing, reaching the island of Kos at around midnight.
“It was terrifying. I thought, if I’m going to make it alive, it’s a blessing. Only now am I starting to get over it. What I made them go through,” she says as her children, five-year-old Karim and two-year-old Mahmoud, chase each other around the sofa and jump onto their parent’s laps.
After reaching a beach on Kos, the family then walked through the night to reach the nearest town.
“I was carrying Karim and Mahmoud was walking. We started at midnight. We didn’t finish walking until nine in the morning. When I look back now, I wonder what we were doing. We did it because of the children, but I still think about what I made them go through,” says Dima.
“The men who leave on their own, without their children… they are making a sacrifice. They don’t know how long it will take or if they will see them again,” she adds.
“If we had known what it would be like, I think we would have stayed. At least in Turkey,” says Mohamad.
After spending three days waiting to be registered by the Greek authorities, the family continued their onward journey. They eventually crossed from Greece to Italy by passenger ferry.
“We had fake German passports, except for Mohamad. For men it is harder,” says Dima. “He hid inside the car, in the trunk. It was terrifying.”
From Italy, the family were driven non-stop to Germany, from where they eventually travelled onwards by train, arriving in Denmark in November 2014.
After a month at Helsingør Hospital and three months in a centre for refugee families in northern Jutland, the family’s asylum applications were approved and they moved to Aarhus in March of last year. Parents Dima and Mohamad expect Mahmoud, the eldest of their two sons, to start school soon.
With Mahmoud and Karim able to go to daycare in Aarhus, Dima and Mohamad are trying to reach a level of Danish that will enable them to enter the local job market and have also attended an integration course run by Aarhus Municipality.
“[The integration course] felt a bit like we were filling the time, as there is no differentiation between people’s abilities,” says Mohamad. “For example, we spent three days learning how to make a C.V.”
Marianne Jensen, deputy head at the Lærdansk Aarhus language centre which Mohamad and Dima – and all other refugees living in Aarhus Municipality – attend, told The Local that traumatic experiences can strongly influence an individual’s ability to learn Danish.
“Many have experienced some awful things, and this may mean that they don’t sleep well, or that their concentration skills are weakened,” she says. “These things make it harder to acquire a new language. It’s also important to point out that Danish is an extremely difficult language to learn.”
Jensen also points to being without one’s family as a factor that makes going to school more challenging.
“Many are alone – typically a son, while the rest of the family are in Lebanon or Turkey,” she said. “This means that they lack the necessary calm around them. They sit around waiting for a phone call. It really means a lot for them.”
This week, the Danish government approved a new, tighter immigration law, which increased the period refugees must wait before applying for family reunification to three years.
“Mahmoud sometimes asks why we are here and says he wants to go back [to Syria],” says Dima.
“We had a better life in Syria,” reflects Dima, an interior designer. “I liked being a house mum there – I can give my kids the time they need.”
The family eventually decided to leave after nearby explosions smashed the windows of their house on three separate occasions.
“It was hard to leave Syria,” says Mohamad, who left his job as a senior accountant in a Damascus bank. “But there are no rules there anymore. Only if you have a weapon can you make the rules.”
“We’ve found that it’s possible to find jobs [in Denmark] as cleaners and that kind of thing and people are really good at helping with that, but takes a long time to get a career job,” says Dima. “So for now, anyway, we’re just waiting.”
The second part of this article portraying a Syrian family in Denmark, in which Dima and Mohamad share their progress in learning Danish and finding work, can be read here.