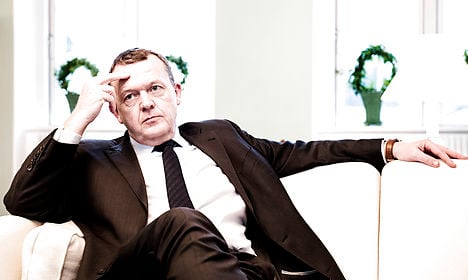 A Guardian cartoon comparing Lars Løkke Rasmussen to Nazis was practically unavoidable in Denmark on Wednesday. Photo: Linda Kastrup/Scanpix
Legislation agreed in Denmark to seize the valuables of refugees in the hope of limiting the flow of migrants is “despicable”, US-based rights watchdog Human Rights Watch (HRW) said on Wednesday.
“I think it's despicable that Denmark and also in a sense Switzerland are moving to seize the last remaining assets of people, who by virtue of their movement and vulnerability tend to be impoverished and have very little on them,” the executive director of HRW, Kenneth Roth, told a news conference in Istanbul, referring to a Swiss law that since the 1990s has required asylum seekers to contribute to the costs of hosting them in the wealthy Alpine country.
“Does a rich country like Denmark really need to strip the very assets of these desperate asylum seekers before providing them basic services?” asked Roth, who was presenting HRW's annual report in Istanbul.
He said the seizure plans appear “purely vindicative and purely an effort to send a signal 'don't you dare come to Denmark if you're an asylum seeker who has arrived to European Union'”.
“That cold hearted response is not what we would expect from a wealthy European Union member,” he added.
Roth's remarks were just one of many from the international community to condemn Denmark’s new bill aimed at dissuading migrants from seeking asylum by delaying family reunifications and allowing authorities to seize valuables to pay for the stay of migrants in asylum centres.
Some have likened the Danish proposals to the confiscation of gold and other valuables from Jews by the Nazis during the Holocaust.
British newspaper The Guardian published an editorial cartoon on Wednesday that depicted Danish PM Lars Løkke Rasmussen in a Nazi-like uniform while surrounded by the nation’s largest export successes: pork, Legos and a slogan that played off of Carlsberg’s ‘probably the best beer in the world’ tagline.

Meanwhile, The Independent ran a cartoon showing the Little Mermaid flush with cash and jewellery confiscated from refugees and media outlets the world over prominently featured the story in an unflattering light for Denmark’s international image.

Chinese dissident artist Ai Weiwei said on Wednesday that he would pull his exhibitions from Denmark over his disgust with the bill.
The negative attention was certainly noticed by the influential business lobby group the Confederation of Danish Industry (Dansk Industri).
“Negative discussions about Denmark to the degree we have seen today is worrisome,” the group’s deputy director, Peter Thagesen, told Ritzau.
Thagesen said he didn’t think that the fallout over what has been labelled ‘Denmark’s jewellery law’ would reach the same levels as the Mohammed cartoon crisis a decade ago.
He cautioned however that debates that once might have remained within Denmark are now global fodder.
“We need to get used to the fact that when we communicate nationally, we are also communicating internationally. We have a very sharp and direct way of communicating in Denmark and that can easily be misunderstood abroad,” he said.
Rasmussen has previously claimed that the legislation passed on Tuesday is “the most misunderstood bill in Denmark's history”.