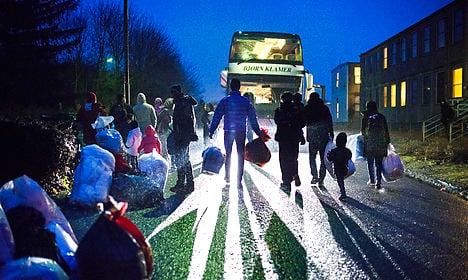 The bill will not only impact arriving refugees, but also permanent residence applicants. Photo: Sara Gangsted/Scanpix
The bill includes several different measures, including allowing police to confiscate valuables and cash from migrants. Here are some of the main points:
— Police will be able to search migrants' luggage and seize cash exceeding 10,000 kroner (1,340 euros, $1,450), as well as any individual items valued at more than that amount. Wedding rings and other items of sentimental value will be exempt.
Earlier this month the amount was raised from 3,000 kroner amid a public outcry and comparisons to Nazi Germany's seizing of gold and valuables from Jews and others during World War II. After thorny negotiations, parliamentary backing for the proposal was secured a few days later by removing any upper limits on the value of items with a sentimental value.
The government has defended the searches, arguing that people who have lived their entire lives in Denmark may also be asked to sell valuables to qualify for social benefits.
Few people believe the seized cash and goods will raise any significant amounts of money.
“We are saying that if you want to come to Europe you should stay clear of Denmark,” said Martin Henriksen, a spokesman for the anti-immigration Danish People's Party.
Switzerland has since the 1990s confiscated cash amounts, but not material goods, from people seeking asylum in the country if they exceed 1,000 Swiss francs ($995, 913 euros).
— Refugees granted a lower form of protection status under Danish law, meaning people fleeing indiscriminate violence rather than individual persecution, have to wait three years instead of one year before applying for family reunifications. Once the application has been filed, the process can take years.
The waiting time has prompted allegations that Denmark will violate the European Convention on Human Rights, the UN Convention on the Rights of the Child, and the UN Refugee Convention.
Amnesty International said the move could “have a devastating impact on families, including their rehabilitation from experiences of trauma and their ability to integrate and adapt to life in a new country.”
— For permanent residency applications, Danish language requirements have been raised from Danish 1 to Danish 2, and the person must have been employed for 2.5 of the past three years rather than three out of five years.
Foreigners can first apply for permanent residency after six years in the country instead of the current five. That period can however be reduced to four years for foreigners who have fulfilled four supplementary conditions: displaying 'active citizenship' by participating in civic organizations or the passing of a citizenship test, steady employment for four of the past 4.5 years, an annual salary of 270,000 kroner for two years prior to application, or the completion of Danish 3 language courses.
— Residence permits are shortened to two years from five for those granted a higher form of protection, meaning asylum seekers facing persecution based on their race, nationality, religion, political beliefs or association with a specific social group.
— Refugees have to pay the transportation costs of family members they bring to the country.
— A fee of 3,700 kroner (500 euros, $540) will be introduced on applications for permanent residence permits.
— The selection of 500 yearly UN quota refugees will be based on their “integration potential” which includes criteria like language abilities, education, work experience, age and motivation.
The criteria were first introduced in 2005 by a right-wing government but were later rolled back.
The entire text of the law proposal can be read here.