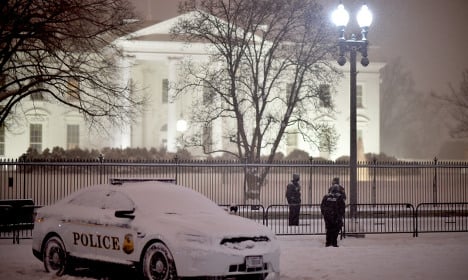 Forecasters predict that the storm could dump more than two feet (61 centimetres) of snow in Washington DC. Photo: Mladen Antonov/AFP

The airline has provisionally rebooked passengers on later departures this weekend.

The storm is mainly affecting Washington and Baltimore, and up to six inches of snow expected to fall on the US capital.

A deadly blizzard with bone-chilling winds and potentially record-breaking snowfall slammed the eastern US Saturday as officials urged millions in the storm’s path to seek shelter, warning the worst is yet to come.

US news reports said at least eight people had died by late Friday from causes related to the monster snowstorm, which is expected to last until early Sunday.

Six people died in North Carolina, one in Virginia and one in Kentucky, CNN reported.

Reuters said at least six people had been killed in car crashes on icy roads in North Carolina, Kentucky and Tennessee.

Forecasters predict that the storm could dump more than two feet (61 centimetres) of snow in Washington, DC and the surrounding area by late Saturday, bringing life to a wintry halt as residents ride out the rough weather.

“The real teeth of this #winterstorm will be after midnight thru early Sat afternoon. Heavy snow, increasing winds, lightning threat,” the National Weather Service (NWS) tweeted.

A blizzard warning was in effect for a large swath of the eastern United States from Washington up to New York.

The storm is expected to affect about 85 million Americans — about one quarter of the inhabitants of the United States. Before it’s all over, it could cause more than $1 billion in damage, NWS officials said.

If the blizzard leaves as much snow in Washington as forecast, it could surpass a record set in 1922 by a storm that dumped 28 inches over three days and killed 100 people after a roof collapsed at a theater.

US Capitol Police have said they were lifting a decades-old sledding ban, but the national monuments, Capitol building and Smithsonian museums were all closed.