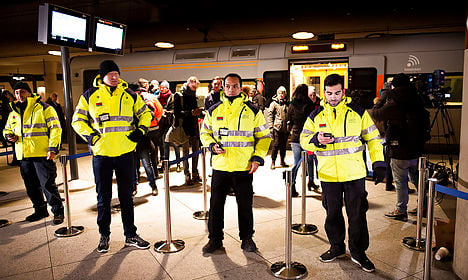 Sweden's ID checks are costing Danish rail company DSB millions and causing traveller delays. Photo: Nils Meilvang/Scanpix
The identity check process is on the whole reported to be running smoothly but is proving costly for Skånetrafiken, the regional Swedish transport authority monitoring the new controls, which were introduced on January 4th.
Magnus Andersson, a business manager at the agency, said in a press release on Thursday that the checks were costing around one million Swedish kronor (800,000 Danish kroner, $116,000) a day, an expense shared with the Danish train company DSB, which has been helping to manage the controls.
As well as adding to staffing and administration fees, the new measures on the border are affecting railcard sales. Season ticket purchases in the Skåne region were down by 3.6 percent during the first two weeks of 2016 compared with the same period last year, the release said, with many would-be commuters appearing to be put off by the checks.
Travellers crossing the Øresund Bridge by train have seen their journeys between the Danish capita and Malmö in southern Sweden increase by around 30 minutes.
“The situation with dual controls, both identification checks at Kastrup [the train station at Copenhagen Airport] and border controls in Hyllie [a train station in southern Sweden], are not optimal, they unfortunately result in a long journey for our travellers,” said Andersson.
Under the new rules, rail commuters heading from Denmark to Sweden have to exit their trains at Kastrup Station and go through checkpoints before boarding the train again in order to travel onwards to Sweden. Those without valid ID are refused entry. People travelling in the opposite direction are also asked to show identification.
The controls were introduced after the Swedish government said it could no longer guarantee accommodation for all asylum seekers arriving in Sweden and therefore wanted to monitor arrivals to the country more closely.
It is the first time in half a century that Sweden has demanded photo identification for all travellers from Denmark and represents a blow to Europe's cherished passport-free Schengen system.
The new requirements have also drawn strong criticism from commercial companies in the Øresund region, worried that the changes could have a big impact on business and trade on both sides of the border.
“The commuting system is the blood system of a metropolitan economy. It will stop the blood flowing,” Per Tryding, deputy CEO of the Chamber of Commerce and Industry of Southern Sweden, told The Local earlier this month.
The Swedish government has said it will review whether or not to continue the checks on a monthly basis.