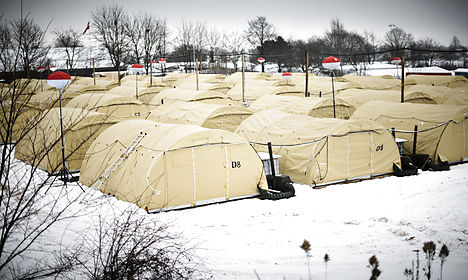 A refugee tent camp in Næstved. Photo: Mathias Løvgreen Bojesen/Scanpix
In the UN Human Rights Council's first review of Denmark's rights record since 2011, a number of the 87 country representatives who took the floor decried the Scandinavian country's recent tightening of its migration policies as it struggles to deal with record numbers of asylum seekers.
US representative Keith Harper was among those who voiced alarm over a bill expected to pass through the Danish parliament allowing the confiscation of migrants' valuables, among other measures.
“We note with concern the bill pending in the Danish parliament that would permit the Danish authorities to search the belongings of asylum seekers and seize cash and certain objects of value,” he told the council.
Egyptian representative Mohamed Elmolla also blasted the bill, stressing that “confiscating valuable belongings to cover refugees' expenses (is) in clear violation of their rights under the Universal Declaration of Human Rights.”
Gross misunderstandings
But Danish Foreign Minister Kristian Jensen insisted the international outcry over the bill was due to “gross misunderstandings.”
“The Danish welfare state is based upon the very simple principle that the state will provide and pay for those unable to take care of themselves, not for those who are able,” he told the council.
“This simple principle applies for Danes seeking unemployment benefits, as well as to asylum seekers,” he said, explaining the reasoning behind the plan to seize asylum seekers' cash exceeding 10,000 kroner (1,340 euros, $1,450), as well as any individual items valued at more than 10,000 kroner to help pay for their housing and benefits during the asylum process.
Wedding rings and other items of sentimental value are exempt, he stressed.
In Copenhagen on Thursday, the Danish lawmakers gave a final nod to the bill, guaranteeing that Prime Minister Lars Løkke Rasmussen's minority right-wing government will win a January 26 parliamentary vote.
In Geneva, diplomats also raised concerns about other aspects of the bill, including measures making it harder for some asylum seekers to obtain family reunifications and residency permits.
And many decried a perceived increase in xenophobic and racist discourse in Denmark.
Veronika Bard, representing neighbouring Sweden voiced understanding over the challenges Denmark was facing, but said her country was “concerned about the tendency of public discourse in Denmark to be prejudiced towards migrants, sometimes even amounting to hate speech.”
Jensen insisted that Denmark was a champion of human rights both at home and abroad, but acknowledged that with the large influx of refugees, his country needed “to do better” in the area of integration.
“Imbalances need to be addressed. They break down societal cohesion, foster the feeling of being excluded and create the fertile ground for radicalisation, hate crimes and discrimination,” Jensen said.
“This vicious circle needs to be broken, and it will be a priority for my government to do so.”
Jensen is also expected to soon travel to Brussels to explain the bill to the European Parliament, which on Wednesday called on Denmark to address the body over its concerns about the legislation.
Home to 5.6 million people, Denmark registered 21,000 asylum applications in 2015, making it one of the top EU destinations per capita for migrants after Finland, Austria, Germany and Sweden.