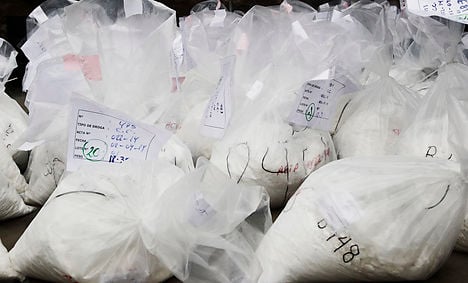 Police said the seized cocaine had a street value of up to 900 million kroner. Photo: ENRIQUE CASTRO-MENDIVIL/Scanpix
Police in July 2015 confiscated 310 kilos of cocaine that was discovered at an Esbjerg business.
The confiscated cocaine was of such pure quality that police believe it could have been cut into as much as 1,200kg and sold at a street value of up to 900 million kroner ($131 million, 120 million euros). The South Jutland Police thus characterized the confiscation as the largest in Denmark's history.
Police announced the bust on Tuesday, nearly six months after the fact, and said that the special unit Task Force West has made six arrests thus far.
“Following the large cocaine seizure, Task Force West underwent a large, secret international investigation,” a police statement read.
Working with local law enforcement, Task Force West has arrested and jailed six people in Belgium and the Netherlands suspected of being behind the large drug supply.
The Danish police are requesting that the arrestees be extradited to Denmark and say that one person has already been delivered.