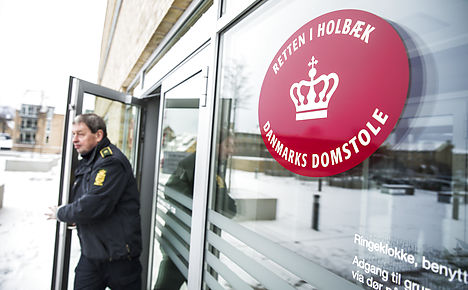 The 15-year-old girl made a closed court appearance in Holbæk on Thursday. Photo: Nikolai Linares/Scanpix
According to the girl’s Facebook profile, she had recently converted to Islam and had spoken openly of jihad.
The proceedings were held behind so-called 'double-locked doors', meaning all information is withheld from the media and the public.
Over the weekend, a 24-year-old man who has previously fought alongside extremists in Syria was arrested and detained in connection to the case. The alleged jihadist is reportedly “a friend” of the 15-year-old girl.
See also: Danish girl who converted to Islam arrested with explosives
The man will be held in isolation until January 26th and in police custody until at least February 9th. His case too is being kept under close wraps, so his lawyer was unable to shed much light on the arrest.
“I cannot say how my client responds to the charges that have been raised,” defence lawyer Michael Alstrup Kristensen told broadcaster DR.
“We have appealed the decision to the High Court because my client and I disagree with the conclusion reached by the judge,” he added.
The 24-year-old man is known to have travelled to Syria, where he claims he was engaged in humanitarian work. Photos and status updates from his now-deleted Facebook profile that were seen by DR, however, show him handling weapons and calling for jihad.
Central and West Zealand Police have not released any information pertaining to the 15-year-old girl or the 24-year-old man.