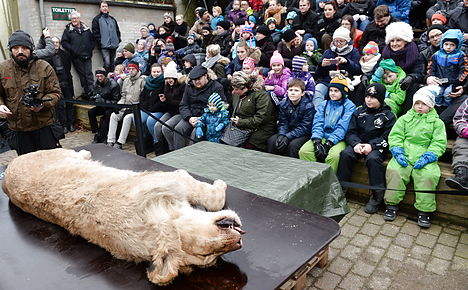 Saturday's dissection of a lion occurred with little attention from the press. Photo: Claus Fisker/Scanpix
A large crowd of curious onlookers of all ages saw a lion dissected at Odense Zoo on Saturday. The following day, guests could see a sitatunga, an African antelope, cut up.
Both dissections took place with little media coverage or protests, in stark contrast to October when the public dissection of a lion garnered international headlines and outrage.
Nina Collatz Christensen, a zoologist at the Odense Zoo, told The Local that October’s media storm was the exception rather than the rule when the zoo performs dissections for its guests.
“We have been doing this for almost 20 years, dissecting all kinds of animals,” she said.
“We think this gives our guests a different kind of education in which we show, rather than just tell, people what is inside a lion or whatever animal we choose. You can compare yourself to the animals and find similarities and differences instead of just looking in a book,” Christensen told The Local.
Click on the photo below for a gallery from Saturday's dissection (some might find the images disturbing)

Photo: Claus Fisker/Scanpix
She said the zoo was never tempted to change its practice despite the media controversy in October.
“We answered all the questions at that time, which came from media all over the world. We feel that it is educational and a good experience for the guests. The kids are very interested when they watch and they ask a lot of questions, so we can see that it is a very good experience for the guests,” Christensen said.
See also: Lion dissection is 'incredibly Danish'
When asked why she thought this weekend’s dissections flew under the radar, the zoologist said “that is a question for the media” but opined that the October dissection might have gained so much attention because the foreign press cobbled it together with the Copenhagen Zoo’s February 2014 decision to put down a giraffe and cut it open in front of the public.
“Last time, there was a lot of foreign media calling us because this isn’t something you do in other countries. This would be something that could really cause problems for zoos in the US, the UK and even the Netherlands, which one thinks of as a very open-minded country,” Christensen said.
She said that dissections would continue as “normal practice” at Odense Zoo.
“It all depends on our surplus animals. We certainly don’t breed for dissection, so it depends on whether we can send the surplus animals to other zoos. If we can’t, we will probably do another dissection,” Christensen said.
Photos from Saturday's dissection can be seen here.