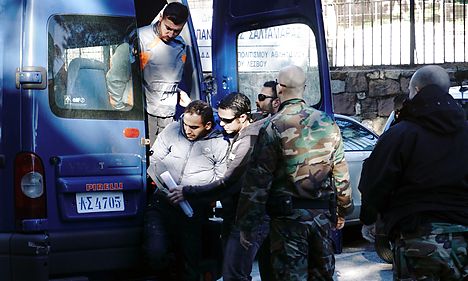 Hellenic coast guard officers escort five Spaniards claiming to be NGO staff, on the island of Lesbos on January 14, 2016, after they have been arrested on suspicion of migrant trafficking. Photo: Sca
The aid workers — two Danes working for the NGO Team Humanity, and three Spanish citizens with the organisation PROEM-AID — were detained on Thursday when coastguards patrolling off the island of Lesbos found two of them in possession of knives and an undeclared two-way radio.
The prosecutor in Lesbos' main town Mytilene on Thursday opened proceedings against the group on suspicion of “attempting to facilitate the entry of illegal migrants”, and they were questioned over the weekend.
“The five detained people have been freed,” an official with the island's port police told AFP, without saying who, if anyone, had been charged.
Greek authorities have in recent days begun a more stringent inspection of the aid groups operating on the holiday island — which saw half a million migrants pass through last year on their way elsewhere in Europe — in a bid to improve rescue coordination.
Seven volunteers — including three Britons, two Americans, a Dane and a Cypriot — had been arrested Saturday on suspicion of stealing lifejackets left behind by refugees.
They were later released after convincing the authorities that they intended to use the lifejackets for makeshift bedding for the migrants.
Peter Bouckaert, emergencies director at Human Rights Watch, criticised the spate of arrests, saying NGOs were filling a “crucial gap in capacity” as cash-strapped Athens struggled to cope with the flow of arrivals.
“The work of volunteers on the Greek islands is of critical importance, and saves lives,” he wrote on Facebook.
“Those crucial activities should be facilitated by the Greek authorities, and not impeded.”
PROEM-AID said on its Facebook page that the three Spaniards had not been charged, but that Greek authorities were demanding a deposit of 15,000 euros ($16,400) from the NGO while they continue to investigate.
Greek islands in the Aegean Sea saw more than 800,000 migrants — many of them refugees fleeing war-torn Syria — land on their shores from Turkey in 2015, their first EU stop on a journey to new lives in Germany, Sweden and elsewhere.
More than 3,700 migrants died or were reported missing in the Mediterranean in 2015 while making the dangerous crossing, 800 of them while trying to make it to Greece and the rest heading towards Italy.