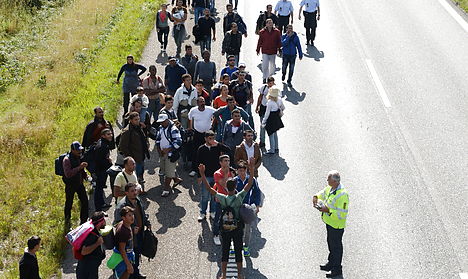 The man said he made the decision to help after seeing TV images of refugees walking on the highway in September. Photo: Claus Fisker/Scanpix
A 41-year-old man who said he spontaneously decided to give refugees a ride from northern Germany into Denmark was told to pay a 5,000 kroner fine on Friday.
The man admitted in a Randers court that he gave five Afghan refugees a ride from the northern German city of Flensborg to the ferry port at Grenaa.
“I came home during the afternoon and saw on TV that refugees and migrants were walking up and down the motorway. I was particularly affected by seeing the many children,” the man said in court, as quoted by Ritzau.
The man’s case is the first of many expected to hit the courts in the coming weeks that result from Danish motorists helping refugees during a mass influx in early September.
The man’s lawyer unsuccessfully argued that his client’s good intentions should not be punished.
The prosecutor in the case acknowledged the man’s “compassionate stance” and thus didn’t push for imprisonment even though she could have. She instead requested a 15,000 kroner fine.
“In an effort to help, he crossed the line for what is legal,” prosecutor Tine Friis said.
The man accepted the judgement, while prosecutors have 14 days to decide if they want to appeal to the High Court in an effort to get the stiffer fine.
Meanwhile, two Danes are facing human smuggling charges on the Greek island of Lesbos and are expected to appear in court on Saturday.
The two men went to the island to help arriving refugees and their lawyer said they are “shocked” by their arrest and pending court case.
According to Ritzau, the two men are sitting in a jail cell in the town of Mytilini with three Spaniards who face the same charge.
The Danes created the humanitarian organization Team Humanity after visiting Lesbos on vacation and seeing refugees arriving on the island by boat. The organization's leader told Ritzau that the pair were arrested on Thursday after trying to assist a boat of refugees that appeared ready to sink.