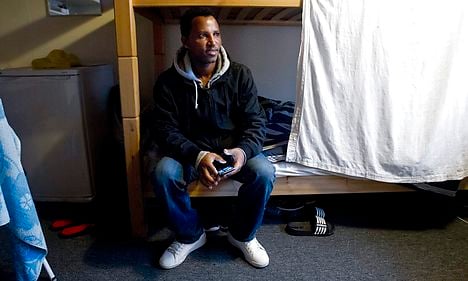 A refugee at the asylum centre in Thyborøn. Photo: Morten Stricker/Scanpix
Parliament will on Wednesday begin a series of debates on the bill, ahead of a vote on January 26.
Faced with a storm of criticism, Prime Minister Lars Løkke Rasmussen, whose right-wing Venstre party is behind the plan, called it “the most misunderstood bill in Denmark's history.”
His minority government and its right-wing allies — the far-right Danish People's Party (DF), the Liberal Alliance and the Conservative People's Party — reached an agreement on the bill on Tuesday with the  opposition Social Democrats, meaning it is now supported by a majority of parties in parliament.
The amended bill would allow Danish authorities to seize migrants' cash exceeding 10,000 kroner (1,340 euros, $1,450), as well as any individual items valued at more than 10,000 kroner.
Wedding rings and other items of sentimental value would be exempt, the agreement said, also citing engagement rings, family portraits and badges of honour.
But items such as watches, mobile phones and computers worth more than 10,000 kroner may be seized, it said.
Copenhagen's government last week began backtracking on its proposal by raising the amount of cash a refugee can keep from the initially-suggested 3,000 kroner to 10,000 kroner.
The proposal is part of a bigger immigration bill to be debated by parliament on Wednesday.
Three small left-wing parties, the Red Green Alliance (Enhedslisten), the Socialist People's Party and The Alternative, remain opposed to the bill.
Storm of criticism
Integration Minister Inger Støjberg has faced a wave of criticism over the plans to search migrants' bags for gold and other valuables, prompting some commentators to draw parallels to Nazi Germany.
UN refugee agency UNHCR said on January 6 that the Danish government's bill sent a signal to other countries that “could fuel fear, xenophobia and similar restrictions that would reduce — rather than expand — the asylum space globally.”
Other parts of the bill include delaying family reunifications for some refugees by up to three years, shortening temporary residence permits and making it harder to obtain permanent residency for all foreigners.
The government has defended the searches on the grounds that Danish nationals seeking welfare handouts can expect similar treatment.
“It is already the case that if you as a Dane have valuables for more than 10,000 kroner it may be required that this is sold before you can receive unemployment benefits,” Støjberg said last month.
'Completely distorted'
The fact that Tuesday's amended bill no longer had any upper limit on the value of wedding rings and other items of sentimental value means refugees will be in some ways better off than regular Danes, she argued.
“It is true that with the change made now, you can in some instances see that asylum seekers are in a better position than people who have lived in Denmark their entire lives,” she told Ritzau news agency.
Prime Minister Rasmussen said the reactions were exaggerated.
“When you look at the debate you almost get the impression that when people come to the border they're going to be turned on their heads to see if their last coins can't be shaken from their pockets. It's completely distorted and wrong,” he told media Tuesday.
And a spokesman for the far-right DF told AFP in December that the bill was intended as a “signal” to dissuade migrants from coming to Denmark, and not aimed at actually raising money.
The proposal is the latest in a string of moves by Denmark to reduce the number of refugees coming to the country.
Other measures have included shortening residence permits, delaying family reunifications and placing adverts in Lebanese newspapers.
Denmark received 21,000 refugees last year, compared to 163,000 in neighbouring Sweden, which until recently had some of Europe's most generous asylum rules.