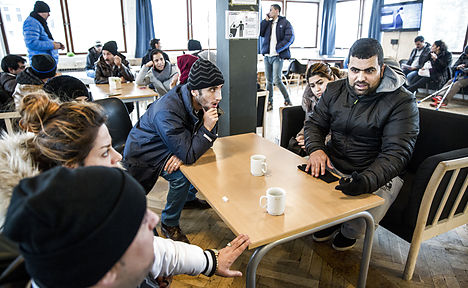 A group of refuges speak together at the Auderød asylum centre. Photo: Nikolai Linares/Scanpix
In return for staying at a Danish refugee centre, Iranian software engineer Sarah Alimalayeri said she was happy to hand over the gold bracelet and necklace she was wearing, but not her pendant.
“You can't take everything, but this is a good balance,” she said.
The 24-year-old migrant is an unlikely supporter of a controversial bill due to be discussed in the Danish parliament on Wednesday, which would allow police to seize migrants' valuables to pay for their stay in asylum centres if it is passed later this month.
Rather than raising significant amounts of money for the state, it is widely seen as the latest in a string of moves by the Danish government to tell potential migrants to steer clear of Denmark.
Copenhagen's single-party Venstre government, which relies on support in parliament from the anti-immigration Danish People's Party, last week watered down the proposal by raising the amount of cash a refugee can keep from 3,000 kroner (402 euros, $438) to 10,000 kroner.
But despite international outrage and a leading US newspaper making comparisons to Nazi Germany, Integration Minister Inger Støjberg has refused to back down from the bill's most controversial element: searching migrants' bags for gold and other valuables.
Only items for personal use such as mobile phones and watches as well as items of sentimental value like wedding rings will be exempted.
The centre-right minority government has defended the bill, arguing that Danish nationals seeking welfare handouts can expect similar treatment.
“It is already the case that if you as a Dane have valuables for more than 10,000 kroner it may be required that this is sold before you can receive unemployment benefits,” Støjberg said last month.
“In Denmark, if one can manage on one's own, one manages on one's own,” she stressed on Friday.
Refugees divided
At the Auderød asylum centre 60 kilometres (37 miles) northwest of Copenhagen, Alimalayeri's view was clearly in the minority — but she insisted that Denmark was within its rights to confiscate valuables to pay “for all of these services.”
One of her friends at the refugee centre was wealthy but did not want the Danish authorities to find out for fear they would reject her asylum application, she claimed.
However, several other residents said they had little more than the clothes they were wearing and questioned the effects of the bill.
“I owe 7,000 euros [I borrowed] to get here,” said Farhad Moradi, a 22-year-old Kurdish student from Iran, as he shuddered in a t-shirt in near-freezing temperatures.
Inside the centre's communal area nearby, young men played pool and Arabic pop music blared from a TV set.
Tarek Issa, a 25-year-old law student from Hama in Syria said he had read about the Danish proposal on Facebook before travelling to the country to join his family, but said it did not affect his choice of destination.
“We almost paid everything to come here. Like a house, like a restaurant we owned before,” he told AFP. A police search of his bags would turn up “maybe 100 euros,” he laughed.
Widespread criticism
The proposal is part of a bigger immigration bill which will also delay family reunifications for some refugees by up to three years, as well as shortening temporary residence permits and making it harder to obtain permanent residency for refugees and other immigrants alike.
UN refugee agency UNHCR said on January 6 that the proposals sent a signal to other countries that “could fuel fear, xenophobia and similar restrictions that would reduce — rather than expand — the asylum space globally.”
“You might of course think that this is really bad publicity for Denmark. I do,” said Johanne Schmidt-Nielsen, political spokesperson for the leftist Red-Green Alliance (Enhedslisten).
“But I think the Danish government… is quite happy, because the main purpose with this proposal is to make refugees afraid of applying for asylum in Denmark,” she added.
Denmark received 21,000 refugees last year, compared to 163,000 in neighbouring Sweden, which until recently had some of Europe's most generous asylum rules.
The Danish Refugee Council said the confiscation element of the sweeping immigration bill mostly seemed to be “a measure of symbolic character”.
“As far as we know there are not many people carrying valuables like that,” spokesman Sebastian Juel Frandsen said.
Criticism has not just been limited to the centre-left opposition: Two government allies have also said they will not support the migrant searches unless changes are made.
The Conservatives want to see a detailed list of things that cannot be confiscated, while the Liberal Alliance only supports seizing large amounts of cash.
The Social Democrats, the main opposition party, wants more guarantees that items of personal value will not be removed.
After being discussed in parliament on Wednesday, the immigration bill will be sent to a parliamentary committee, after which lawmakers will discuss it again on January 21. A vote will be held on January 26.