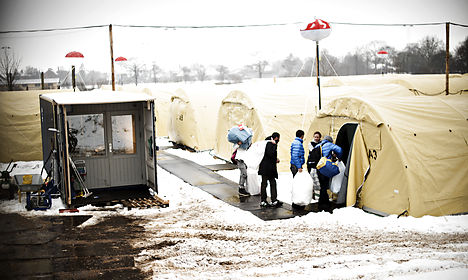 A new refugee tent camp opened in Næstved on Friday. Photo: Mathias Løvgreen Bojesen/Scanpix
Under the first draft of the bill, due go before parliament on January 13th, migrants would have been entitled to keep only cash and valuables worth around 3,000 kroner (400 euros, $435).
But in the face of criticism — and comparisons to Nazi Germany's seizing of gold and valuables from Jews and others during World War 2 — Integration Minister Inger Støjberg said the total sum would be increased to 10,000 kroner ($1,450, 1,340 euros).
See also: Outrage at Danish plan to strip refugee jewellery
In addition, items for personal use such as mobile phones and watches as well as items of sentimental value such as wedding rings will be exempted, the ministry said in a statement.
The centre-right minority government has defended the bill, arguing that Danish nationals seeking welfare handouts can expect similar treatment.
“It is already the case that if you as a Dane have valuables for more than 10,000 kroner it may be required that this is sold before you can receive unemployment benefits,” Støjberg said last month.
See also: Police union slams plan to strip refugee jewellery
The proposed law is the latest in a string of moves by Copenhagen to avoid the kind of refugee influx seen in neighbouring Sweden, where around 150,000 people had applied for asylum by the end of November 2015 compared to just 18,000 in Denmark.
Other measures have included shortening residence permits, delaying family reunifications and placing adverts in Lebanese newspapers to deter migrants.
“In Denmark, if one can manage on one's own, one manages on one's own. It's a principle which must apply as much to asylum seekers as it applies to Danes,” Støjberg said on Friday, quoted by the Ritzau news agency.