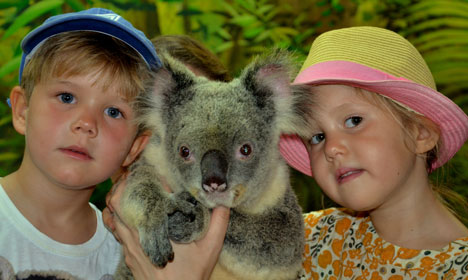 Prince Vincent, a koala and Princess Josephine. Photo: The Crown Princess of Denmark
The Danish royals enjoyed double the birthday fun on Friday as twins Prince Vincent and Princess Josephine turned five years old.
They are the youngest children of Crown Prince Frederik and Crown Princess Mary. The twins’ eldest brother Prince Christian, who is behind his father in line for the throne, celebrated his tenth birthday in October while sister Princess Isabella will turn nine in April.
Vincent and Josephine were born on January 8th, 2011 at Copenhagen’s Rigshospital. Prince Frederik entered the world first at 10.30am followed by Princess Josephine, who came 26 minutes later.
To mark the twins’ birthday, the Danish Royal House released three new photos of the young royals, all of which were taken by their mother Mary. One showed the youngsters posing with a koala in an obvious nod to the crown princess's Australian roots.
The two five-year-olds can look forward to spending more time with their grandfather, Prince Consort Henrik, whose retirement from public life was announced in Queen Margrethe's annual New Year's Eve speech.