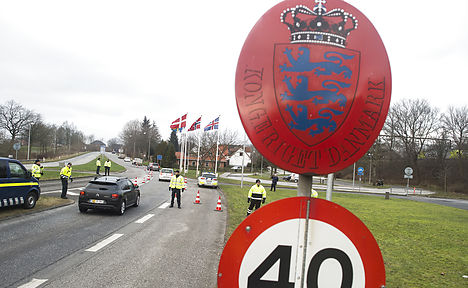 Border controls took effect on Monday. Photo: Claus Fisker/Scanpix
Numbers from the Immigration Ministry released on Friday showed that just 23 people sought asylum on Thursday, reversing a trend that saw the numbers increase sharply in the first three days of Denmark’s new temporary border controls.
Before Thursday's low totals, 365 people applied for asylum between Monday and Wednesday. By comparison, just 167 applications came in during the four-day period before the checks were introduced.
The result of the first three days of border checks thus appeared to give credence to Prime Minister Lars Løkke Rasmussen’s repeated warnings that a country risks increasing the number of asylum seekers it receives when it implements controls at its borders.
The PM used that argument repeatedly when fighting back requests from his support party, the anti-immigration Danish People’s Party, for months before reversing course on Monday.
In November, for example, Rasmussen said that border controls “would with certainty mean that we would have more, not fewer, asylum seekers in Denmark”. Despite that stance, the PM said on Monday that border controls were necessary following the Swedish government’s decision to demand ID checks for all people entering Sweden.
Integration Minister Inger Støjberg told Politiko that she wasn’t surprised by the initial asylum increase.
“Asylum figures are just one parameter. It can’t catch anyone off guard that more asylum seekers can come as a result of border controls – that is precisely what we said all along,” she said.
“We are most interested in ensuring peace and order in Denmark and because we do not want to see a build-up of refugees and migrants who wish to move on [from Denmark], we have set up border controls,” Støjberg added.
According to figures released from the Danish National Police (Rigspolitiet), police at the 15 border points to Germany appear to be stepping up their random controls. Police checked 3,788 people on Wednesday compared to just 1,366 on Tuesday. A total of 84 people were denied entry into Denmark between Monday and Wednesday and nine were charged with human smuggling.
Both Denmark and Sweden have implemented border checks in order to slow the flow of refugees and migrants. The refugee crisis has been a major point of contention between the Scandinavian neighbours. Sweden, with a population of 9.8 million, took in over 160,000 asylum seekers in 2015, while Denmark, a country of 5.6 million, received just 18,000.
Swedish officials said on Tuesday that the first day of border controls there led to “a sharp drop” in the number of asylum seekers but warned that it was too soon to draw any sweeping conclusions.