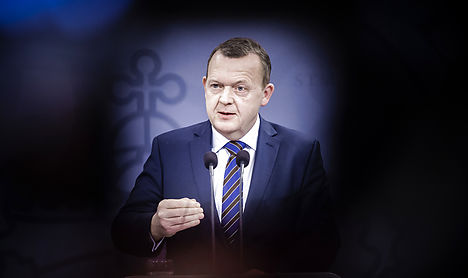 PM Lars Løkke Rasmussen may be called in as a witness. Photo: Thomas Lekfeldt/Scanpix
A man who warned that Omar el-Hussein’s terror attack in Copenhagen in February was “just the beginning of repeated terror attacks against this shitty country” also sent threatening messages to Rasmussen and Støjberg, an indictment revealed on Thursday.
The messages sent to the two Venstre politicians were sent via email while the 32-year-old was already locked up for other threats he had posted on Facebook, news agency Ritzau reported.
Messages on the man’s Facebook page included “terror is an obligation”, “the only solution is violence until the so-called freedom of speech is under control” and “I want to slaughter infidel swine”.
The prosecutor in the case is pushing for man, who has Georgian roots and connections to known Islamists including Said Mansour, to be held in psychiatric care before being expelled from Denmark.
See also: Convicted terrorist loses Danish citizenship
According to Ritzau, the 32-year-old’s defendant wants to call Rasmussen and Støjberg as witnesses but the prosecution has protested those plans, saying that the threats against the ministers are not at the heart of the case.
“This isn’t a case about the threats against those two – on the contrary it is about threats to carry out terrorism,” Anders Larsson told Ritzau.
The Frederiksberg court will rule on whether the two top politicians can be called in as witnesses for the defence after the trial begins on Monday.