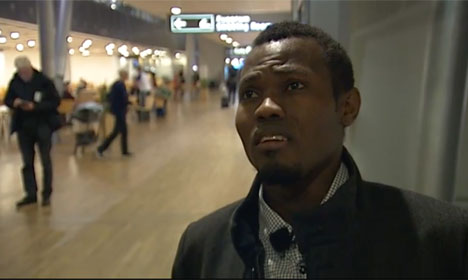 Marius Youbi left Denmark on Thursday. Screenshot: DR/YouTube
Marius Youbi, an international student at Aarhus University who has achieved national fame since his case hit the media last month, has returned his native Cameroon after being kicked out of Denmark.
Youbi, who received top marks at all of his university exams, was told to leave the country by Friday by the Recruitment and Integration Authority (Styrelsen for International Rekruttering og Integration – STAR).
See also: Deported African cleaner blitzes Danish uni exams
The Cameroonian was found to have spent 16 and a half hours a week in a cleaning job, taking him around an hour and a half over the limit permitted for international students. As a result, Youbi's residence permit was revoked and he was asked to leave the country.
After the order to leave, the university agreed to move Youbi's exams forward, leaving him faced with three tests in one day, and 48 hours to prepare. All three exams resulted in a '12' grade, the Danish equivalent of an A.
Early on Thursday morning, the 30-year-old Youbi left Denmark from Billund Airport with a heavy heart.
“I have built something up in Denmark. I have made many friends here and I have a family here that I am leaving. It is hard to say goodbye to so much,” he told broadcaster DR in fluent Danish.
The broadcaster’s video from the airport shows Youbi consoling his crying sister and nephew, ensuring them that he would try to return to Denmark.
Over 18,000 people signed a petition protesting Youbi’s deportation and a rally for his cause was held in Herning. The deputy chairman of the Socialist People’s Party (SF) planned to hand-deliver the petition to Immigration Minister Inger Støjberg in an appeal to get Youbi’s case reversed.
The minister, however, has already said that she cannot interfere with individual cases.
Facing the same fate as Youbi is Nepalese student Shalik Ram Bhattarai, who was told to leave the country by January 7th because he worked too many hours alongside his studies.
The 28-year-old has been in Denmark for eight years. His wife, who has lived in the country for five years, and their three-year-old son, who was born in Denmark, have also been told to leave.
Bhattarai has been ordered to leave the country by Thursday, but on Wednesday the Immigration Appeals Board (Udlændingenævnet) agreed to hear an appeal and the family will be allowed to remain in Denmark until a ruling is handed down.
Bhattarai was told to leave Denmark just days after finishing his Master’s thesis in economics at the University of Southern Denmark, an education that he says has cost him 400,000 kroner. His studies and investment risk being for naught as he is now at risk of not being able to defend his thesis in February as planned.
For a short period in 2012-13, Bhattarai worked too many hours alongside his studies. He said he was unaware of the rule and feels he has already paid the price for his violation.
“I think I should maybe get another chance. I paid a fine and I thought that the Danish Immigration Service [Udlændingestyrelsen] would give me another chance and I wouldn’t repeat [the mistake],” he told TV2 Fyn.
“I think it is sad that they will destroy my education and my future. But that is something they decide and I can’t do anything,” he added.