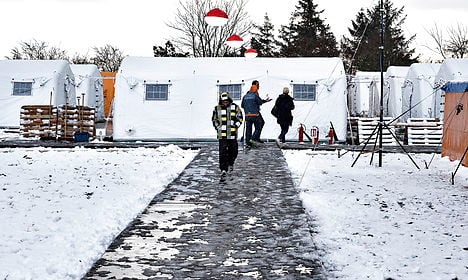 Refugees at the tent camp in Thisted in northern Jutland. Photo: Henning Bagger/Scanpix
In a sharply worded 18-page report, the UNHCR accused Denmark of violating its “long tradition of providing sanctuary to those in need” by proposing a number of new changes to immigration policies.
“The proposals presented by the government are evidently aimed at conveying a message to make it ‘less attractive’ to seek asylum in Denmark, and is a deeply concerning response to humanitarian needs. UNHCR regrets that Denmark is restricting its asylum legislation for the sole purpose of curbing the number of asylum-seekers, instead of focusing on promoting and supporting a fair distribution of asylum-seekers within all EU Member States,” the report reads.
The UNHCR expressed disapproval of the government’s plans to roll out tougher rules for family reunification and the obtainment of permanent residency and warned that the moves will likely have a noticeably negative impact on integration.
The report also calls Denmark’s controversial plan to confiscate valuables from asylum seekers “an affront to their dignity and an arbitrary interference with their right to privacy”.
“The signal Denmark’s introduction of restrictions sends to other countries in the world […] is worrisome and could fuel fear, xenophobia and similar restrictions that would reduce – rather than expand – the asylum space globally and put refugees in need at life- threatening risks,” the UNHCR writes.
The agency appealed to the Danish government to “reconsider” its sweeping changes to immigration policy.
The government's plans to tighten rules related to asylum seekers, refugees and all other immigrants enjoy a majority of support in parliament and are expected to be formally approved in the coming weeks.
The UNHCR's full report can be read here, in English.