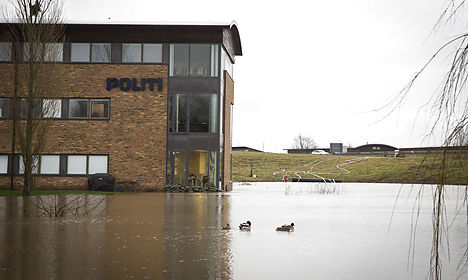 The Kolding police station and several other areas in Denmark were flooded in the days following Christmas. Photo: Frank Cilius/Scanpix
With 904 millimetres of precipitation, 2015 was the second wettest year since the Danish Meteorology Institute (DMI) began keeping records in 1874, the science site Videnskab reported on Thursday.
With just one more millimetre, last year would have surpassed 1999 as the wettest year ever.
2015 also ended up as one of the ten hottest years on record. The average temperature of 9.1C tied 1934 for ninth place on the list. The end of the year was particularly warm, with November 2015 going down as the third-warmest ever and December the second-warmest.
Globally, 2015 was the hottest year ever measured.
Senior DMI climatologist John Cappelen said that 2015 served as proof that Denmark is in for much more extreme weather over the next century if the world fails to take serious action on climate change, something DMI and the Climate Ministry warned about in an October report.
See also: Climate change will make Denmark hotter and wetter
“We are seeing a steadily rising heating curve along with getting wetter and wetter weather. This is very much in line with the models that predict that the weather will steadily become much warmer and wet in the winter and more extreme,” he told Videnskab.
In addition to the near record for precipitation and the top-ten finish for temperature, 2015 also had the second lowest ever number of days in which the temperatures dipped below freezing.
The Climate Ministry and DMI’s report warned that the average temperature in Denmark will rise by 3.7C throughout the remainder of this century if the global levels of greenhouse gas emissions aren’t drastically decreased. The temperature increase will create fewer days with temperatures under the freezing point as well as more frequent and longer-lasting heat waves.
DMI also predicted that rainfall could increase by as much as seven percent over current levels, with extreme water levels that are currently seen only once every 100 years in Copenhagen occurring every second year.
This year has also started on a wet note with snowfall hitting Denmark earlier this week and more expected on Thursday night and into Friday.