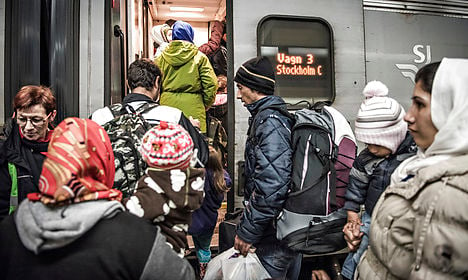 People board a Sweden-bound train in Copenhagen in the final days before the new measures took effect. Photo: Asger Ladefoged/Scanpix
When Denmark announced on Monday that it would implement temporary border controls, Prime Minister Lars Løkke Rasmussen presented it as if his hands had been tied by his Swedish counterparts.
“This is a reaction to a decision made in Sweden,” the PM said, referring to the Swedes' implementation of mandatory ID checks.
“The new Swedish requirements entail a serious risk that a large number of illegal immigrants will be stranded in Copenhagen,” Rasmussen said.
READ ALSO: Denmark implements temporary border controls
On Tuesday night, ahead of a meeting in Brussels with Danish immigration minister Inger Støjberg, Swedish migration minister Morgan Johansson, and Ole Schroder, a German interior ministry official, Denmark’s ruling Venstre party doubled down on its criticism of Sweden.
“Suddenly their irresponsible immigration policies have become a giant headache for Denmark. The Swedes have held an open house but now that people have come they’ve said: Go over to the neighbour instead,” Venstre’s immigration spokesperson Marcus Knuth told Jyllands-Posten.
Knuth said that the Danish government’s stringent immigration policies, which have long conflicted with Sweden’s more generous approach, means that Denmark has more of an “ethical right” to close its borders than its Scandinavian neighbour does.
He went on to criticize the Swedes by saying that the record number of refugees received by the country was a self-made problem.
“It’s not particularly good neighbourliness to first bring hundreds of thousands of refugees to Sweden and then to close the border,” Knuth said.
Danish and Swedish leaders trading barbs over immigration policies is hardly anything new. The refugee crisis has been a major point of contention between the Scandinavian neighbours. Sweden, with a population of 9.8 million, took in over 160,000 asylum seekers in 2015, while Denmark, a country of 5.6 million, received just 18,000.
READ ALSO: Denmark and Sweden in refugee war of words
The two countries also had a verbal tit for tat in November after Johansson said that, with Sweden struggling to provide enough beds, refugees might want to consider “go[ing] back to Germany or Denmark”.
Støjberg called her colleague’s comments “neither good nor appropriate” and said she can only “hope that the Swedes are beginning to take a more realistic approach to the situation”.
Just days prior to that, the two countries’ foreign ministers traded comments after Denmark rejected an appeal to take in some of Sweden’s refugees.
Danish Foreign Minister Kristian Jensen said that Sweden had “chosen its own course” and that the only help the Swedes should expect from Denmark is “inspiration” from the more hardline Danish approach.
His Swedish counterpart Margot Wallström responded by saying Sweden “had done the most per capita in the EU and we have nothing to be ashamed of” and that decisions wouldn't be “based on Danish politics.”
Johansson and Støjberg were summoned to Brussels for a Wednesday meeting with the EU's asylum and migration minister Dimitris Avramopoulos.