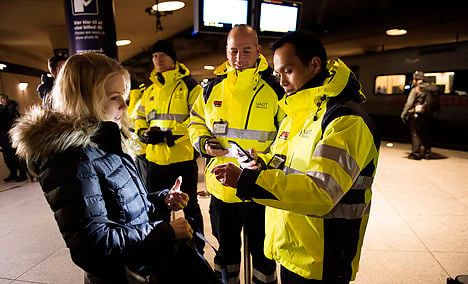 Border checks began on Monday. Photo: Nils Meilvang/Scanpix
For the first time in half a century, Sweden is demanding photo identification for all rail travellers from Denmark as part of efforts to stem the flow of refugees between the two Nordic nations. The move is set to have an impact on 8,600 daily commuters who take the train over the Øresund Bridge, as well as residents who use the connection to have meetings, shop or visit friends and family in Denmark and holidaymakers travelling around, to or from Scandinavia. The Local has spoken to some of those affected.
1. Nicholas Bean, British commuter
Photo: Private
Bean, who works in marketing, only got a job in Copenhagen four months ago and described the changes as “really bad timing” for him, noting that his travel time was set to increase by up to an hour each day. The Briton, who is married to a Swede and has been living in Malmö for two years, said his first journey since the checks started had gone “pretty smoothly” on Monday morning, but that he was still disappointed in the government's decision.
“The whole idea of it is ridiculous nonsense. It's a sticking plaster on a problem that is much, much bigger,” the expat said. But he told The Local he felt it was “hard to not sound like an idiot” when discussing the impact on commuters because he was well aware that there were “people living in tent camps” and “thousands of others who want refuge and need to seek refuge” in Sweden in the coming months. “The checks are not going to stop people coming,” he argued.
2. David Nyman, Swedish journalist Photo: Private
After a night out in Copenhagen, Swedish journalist David Nyman was stopped from returning to Malmö at around 2am on Monday morning. He had failed to take his passport, national identity card or driving licence with him before the checks were introduced and attempted to persuade security staff that his press card should be considered adequate identifcation.
“I got denied because the guards argued that my press ID was not good enough as an ID card,” he told The Local. He said he was “tired and really wanted to go home” and decided to take a taxi instead, at the cost of 1,000 kronor ($118). “This money I will demand to get back,” he said. “I don’t think we should need ID documents to be able to travel between European countries.”
3. Rolf Olsson, Swedish pensioner Passengers board a Sweden-bound train on Monday. Photo: Nikolai Linares/Scanpix
Olsson, 71, who lives in Malmö, is in favour of the checks, despite being a regular visitor to Copenhagen. “I think it's good because we have far too many refugees in Sweden,” he told The Local's reporter Richard Orange at Copenhagen's Kastrup airport. “It has to start somewhere. At the beginning everybody complains and says it's too tough, but after a month or so, everything will calm down. It should have been done a lot earlier.”
He argued that Sweden's national government has not paid close enough attention to how the refugee crisis is affecting the country's third largest city, which has long been a hub for immigrants.
“Stockholm doesn't understand Malmö,” he said.
4. Per Tryding, Swedish businessman Photo: Lars Lydig
A regular traveller between Malmö and Copenhagen, Tryding is deputy CEO of the Chamber of Commerce and Industry of Southern Sweden. He spent Monday morning at Copenhagen airport's Kastrup train station, giving media interviews outlining his argument that the new border checks could have a major impact on business in the Øresund region.
“It felt like it was a diet version of the Berlin wall and it's actually more intimidating than you think when you need to show your identity card like that to a guard and you know they are keeping it somewhere in a cloud,” he told The Local. “Three out of four trains have been cancelled as a result of the checks (…) The commuting system is the blood system of a metropolitan economy. It will stop the blood flowing,” he said.
5. Emma Ohlin, Swedish train ticket vendor Photo: Private
25-year-old Ohlin works in a rail ticket office in Malmö in southern Sweden and says she is worried about her job becoming more stressful in the coming weeks. “Yes, since I meet many travellers who miss their trains in Sweden or demand compensation for cancelled trains,” she told The Local, adding that she was already fielding plenty of questions about the new rules.
“Generally I think it is a bad decision. The Øresund bridge was not designed for ID checks and I know many people who commute who are going to have considerably longer and more complicated journeys. I believe that it will affect the Øresund region in a negative way,” she said.
6. Joakim Sandell, Swedish politician
Photo: Jens Ohlsson
The Malmö chairman of Sweden's ruling Social Democrat party, Sandell, backs the national Red-Green coalition's initiative, describing the new checks as “a must”.
“To reduce the refugee influx we believe that this is necessary,” he told The Local, noting that Sweden took in around 160,000 asylum seekers in 2015, compared to 18,000 helped by Denmark. He said he did not commute daily to Copenhagen but accepted that he would be personally affected by delays whenever he made the journey.
“There are about two parts of the criticism. One is that we are making it harder for asylum seekers in Sweden and the other one is how it is affecting businesses and train commuters. I have an understanding for both parts of the criticism,” he admitted. But he said that he felt no other Swedish political parties had come up with a better alternative solution and argued that “more European countries should have been taking more responsibility” during the earlier stages of the refugee crisis, when Sweden took in record numbers of new arrivals.