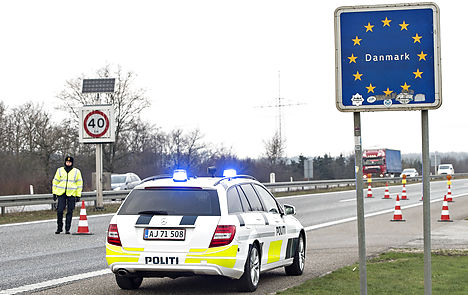 Police made random stops at Denmark's border crossings with Germany on Monday. Photo: Claus Fisker/Scanpix
The Danish National Police (Rigspolitiet) said on Tuesday that the first day of Denmark’s border controls was relatively quiet and without major problems.
Temporary border controls that were implemented at 12pm on Monday resulted in around 1,100 people being checked upon their entry into Denmark. Of those, just 18 were denied entry into the Nordic country.
“The first 24 hours were nice and calm. There were naturally some inconveniences for travellers both at the Danish-German border as a result of the temporary border controls and at the Danish-Swedish border as a result of the transport companies’ ID controls,” Inspector Richard Østerland la Cour said in a press release.
“The efforts were carried out without significant traffic or infrastructure problems,” he added.
See also: Denmark announces temporary border controls
Prime Minister Lars Løkke Rasmussen announced on Monday that Denmark was implementing temporary controls at the German border as a direct result of Sweden’s decision to check the identification of all arrivals from Denmark.
Rasmussen said the decision was “a major step” but vowed that the checks would be random and would not result in the “chaos” and “serious disruptions” of Sweden’s systematic checks.
Media reports from the first day of ID checks at Copenhagen Airport’s Kastrup station, the last stop for trains before entering Sweden, however, said that the ID checks went smoothly and caused only minimal delays.
Danish rail operator DSB said that “fewer than 100” passengers were stopped from entering Sweden for not having proper identification. By day’s end however DSB had decided to accept European identity cards after the interim head of Sweden's national border police commented the Danes were “overinterpreting” the rules.
See also: Travellers stopped at Sweden border over ID confusion
At the border with Germany, which can be crossed at 15 different locations, the Danish National Police said it was stopping private vehicles and public transport passengers based on “professional police profiling”.
In addition to the 18 people who were stopped from entering Denmark, three individuals were arrested on smuggling charges but the police did not provide further details.
Rasmussen said on Monday that Denmark’s controls at the German border would initially last until January 14th, at which time it could be extended by 20 days at a time as the situation warrants.