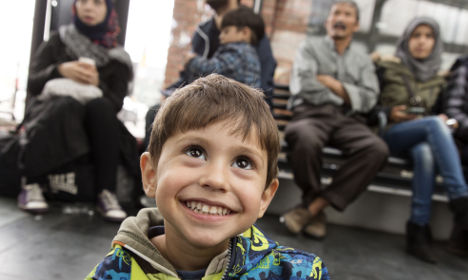 A Syrian refugee arriving in Stockholm this week. Photo: Ola Torkelsson/TT
1. It's a numbers game
Put simply, Sweden takes in more asylum seekers per capita than any other EU nation, while Denmark has a track record for adopting some of the toughest immigration policies in Europe.
Almost 163,000 refugees sought asylum in Sweden in 2015, according to the country's migration agency, compared to Denmark's 18,000.
Around 9.5 million people live in Sweden while there are 5.6 million in Denmark.
2. Sweden has offered permanent residency to all Syrian arrivals
Refugees fleeing the violence in Syria make up the largest proportion of people seeking asylum across Europe and in 2013 Sweden became the first country in Europe to rule that all refugees from the war-torn nation would be granted permanent residency in the light of the worsening conflict.
However the Swedish government announced plans to tighten the rules again again in November 2015.
Denmark introduced temporary one-year permits for Syrian refugees last year with the stated intention of sending them back home “as soon as conditions improve” in the war-ravaged country.

A refugee at Malmö train station in southern Sweden. Photo: Andreas Hillergren/TT
3. Many refugees already have family in Sweden
Given the huge numbers of Syrians who have already been given protection in Sweden (16,785 in 2014 alone), it is unsurprising that many refugees would prefer to set up home close to friends and family.
Sweden has previously offered residency permits to immediate family members of those already granted asylum (husband, wife, partner and children – under the age of 18), but announced stricter time limits in November.
Last year, Denmark said it would only allow for family reunifications if a refugee's initial one-year residency permit was renewed, a move heavily criticized by the United Nations Refugee Agency and others.
4. Sweden offers strong social benefits for refugees
Asylum seekers are offered immediate emergency accommodation on arrival in Sweden before being relocated to temporary housing. Single adults are given a daily benefit of 71 Swedish kronor per day (2,159 kronor or $256 per month), with more available for those with families.
Those granted asylum are then given help finding accommodation, are entitled to free Swedish for Immigrants lessons and may also be offered an 'introduction benefit' from Arbetsförmedlingen, Sweden's Employment Agency, giving them an income of 6,468 Swedish kronor per month ($769) while they search for work.
Denmark also offers social benefits and free language lessons for immigrants. But while it is generally more expensive to live in Denmark than in Sweden, the Danish government has recently slashed the amount of so-called 'integration' money it gives to new arrivals by 45 percent to 5,945 Danish kroner ($891) for a a single adult with no children. This too was subject to criticism from the United Nations and humanitarian organizations. Temporary accommodation for refugees in Märsta, Sweden. Photo: Maja Suslin/TT
READ ALSO: 'It was a long journey and some of my friends died'
5. Global reputation
Sweden has an international image of openness and tolerance.  The current government is a Social Democrat-Green coalition which has spoken out strongly in favour of helping refugees. However it announced in October 2015 that pressure on resources meant that it could no longer guarantee accommodation for everyone.  Meanwhile, the anti-immigration Sweden Democrat party is growing in popularity, but is not part of the government or the country's main centre-right opposition Alliance bloc.
By contrast, Denmark's new single-party government is led by the right-of-centre Venstre, which needs the support of the anti-immigration Danish People's Party to push its agendas through parliament.
The Danish government recently launched an information campaign in foreign newspapers to deter refugees from setting foot on Danish soil. Even the country's former centre-left government headed by Helle Thorning-Schmidt touted a hard-line approach to refugees and immigrants, a record that came back to haunt her on Wednesday when she was passed over for for the position of UN High Commissioner for Refugees.