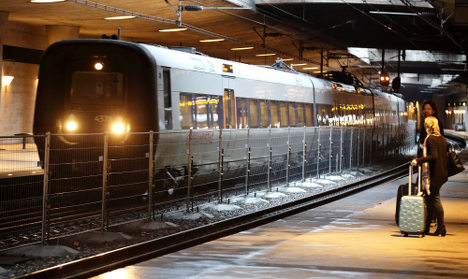 The fence replaces this temporary fence and is to ensure no one sneaks across the tracks to avoid the security checks. Photo: Jens Dresling/Polfoto via AP

All customers crossing into Sweden will be checked in the New Year, as part of efforts to limit the number of refugees heading north.

Sund og Bælt, the Danish company that owns the Kastrup station building at Copenhagen Airport, has been working on the fence since December 20th.

“We have built it during the nights, when there is not much traffic. And while we were working we took the opportunity to clear up some debris,” Lotte Bentzen, spokesperson at Sund og Bælt, told Swedish newspaper Expressen.

The fence has been built to ensure that no one sneaks across the tracks to avoid the security checks, with the company itself absorbing the costs.

“It was not so expensive. And after discussions, we decided to make it a standard height, so we can use it for something else when this crisis is over,” Bentzen said.

Meanwhile, the Danish opposition party, the Social Democrats, said they believed Sweden should have shouldered the extra expenses linked to the new ID checks.

“The Swedish government expects people travelling to their country to be checked, so it is also reasonable that it should pay for the cost,” party spokesman on transport, Rasmus Prehn, told Danish Radio.

The ID requirements, which are set to begin four days into January, follow Sweden's decision to reduce the number of asylum seekers coming into the country, due to an accommodation shortage.

They will apply to trains, buses and ferries from abroad, including Germany, but is likely to have the biggest effect on passengers travelling from Denmark.

The plans have been criticized by various operators and unions warning of travel chaos in the busy commuter region.

More than 150,000 refugees have travelled to Sweden in the past year. But the country has seen a nationwide dip in the number of people claiming asylum in recent weeks, following news of the tighter border checks and a government announcement that it would cut the number of residency permits made available.