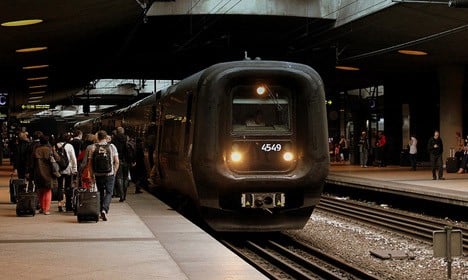 Ticket prices won't go up, but passengers will pay a surcharge, DSB's press chief told The Local. Photo: Calflier001/Flickr
In a press release issued on Monday, DSB said it would begin carrying out the checks from next Monday on Track One at Copenhagen Airport, setting up five control areas, and up to 34 ID control gates.
The move comes after Sweden's government ordered the mandatory checks in order to limit the number of asylum seekers crossing the border from Denmark.
“It is still not known for how long the Swedish authorities will continue to require all passengers to Sweden to undergo an ID-check,” the press release reads. “But if the requirement is in force for more than a month, it might mean that those travelling by rail to Sweden will be charged a fee to cover the extraordinary costs.”
DSB's press chief Niels-Otto Fisker confirmed to The Local that the new ID checks would come with heavy costs.
“The combined cost of carrying out the ID controls and the loss of income will be one million kroner ($150,000) a day,” he said.
He stressed, however, that the final cost would depend on how the added time taken to carry out the checks affected the number of people commuting between the two countries.  “We don’t know exactly how many passengers will refrain from taking the train.”
Rather than an increase in the official ticket price, passengers would be levied a supplementary charge to cover the cost of controls, he explained.
Sweden's government is insisting on compulsory ID checks on all passengers coming across the bridge from January 4th, as part of its efforts to reduce the huge numbers of refugees who have been coming across its borders, which reached a peak of over 10,000 in just one week in early November.
A spokesman for Skånetrafiken, DSB's partner in the train line crossing the bridge, said that discussions were ongoing over how to cover the ongoing cost of the checks.
“We are agreed on the first month, for that we are splitting 50–50. We have an ongoing dialogue about how we should do after that, and we do know not how long the inspections will continue,” Helene Holmqvist, Skånetrafiken's press officer told the TT news agency.
She explained that the joint agreement was based around an estimated cost of just nine million Danish kroner, a fraction of the 30 million DSB estimated on Monday.
DSB estimates that the journey across the bridge between Copenhagen Airport and Malmö will take between ten minutes and half an hour longer than it did before the controls were introduced.