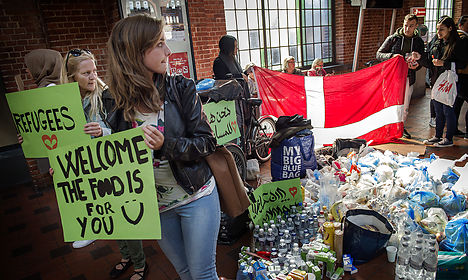 According to a survey carried out be television network TV2, many municipalities feel they are no longer able to cope with costs which include housing, interpreter fees and welfare support.

“We are having serious problems housing all the refugees that are coming to us. The support we are receiving from the state is far from sufficient,” Helsingør mayor Benedikte Kiær told TV2.

Under government rules, municipalities are liable for any rental costs over and above a maximum of 2,100 Danish kroner (around USD $300) that refugees housed in private residences incur.

This total of 2,100 kroner is a relatively low figure in Denmark and leaves municipalities with a large bill to foot.

Adding to the pain, the monthly state handout received by refugees was approximately halved by reforms introduced by the new government in July, and municipalities now have to make up the shortfall.

“We have concluded that municipalities are on the verge of collapse under the weight of the refugee housing problem,” Henrik Sass Larsen, spokesperson for the opposition Social Democrat Party, wrote in Politiken. The Social Democrats advocate further restrictions on asylum in Denmark.

But other opposition politicians, including Sofie Carsten Nielsen of the Radical Liberal (Venstre) party have suggested that the government could improve municipality funding in this area, according to a report in Jyllands-Posten.

Meanwhile, the controversial scheme introduced by the government to house refugees in tents makes neither economic nor practical sense, according to critics who believe that there are still enough disused buildings available around the country to make them superfluous.

According to a report by state broadcaster DR, the cost of heating one such tent camp in the town of Næstved where there are 50 tents, can be up to a quarter of a million Danish kroner (around $36,000) during the cold winter months.

“It is a lot of money to house relatively few refugees and just highlights that this is no more than a politics of symbolism,” Danish Red Cross General Secretary Anders Ladekarl told BT earlier this month.

“It is our conviction that tent camps in Denmark are unnecessary, since there are both school and hospital buildings that are empty and far better-suited as roofs over people’s heads. [The purpose of the tent camps] is certainly not to save money,” Ladekarl added.