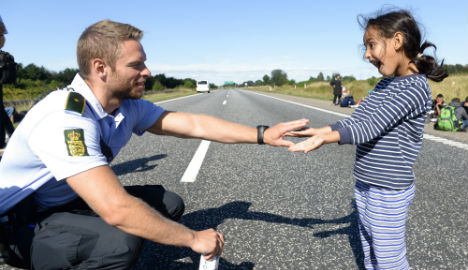 A Danish policeman plays with a refugee girl in September. Photo: Claus Fisker/Scanpix 2015
“I can see that some foreign media are pouring scorn over (the fact) that we in the future may withdraw asylum seekers' valuables and demand that they should pay for their stay in asylum centres themselves,” Integration Minister Inger Stojberg wrote on Facebook.
“There is no reason to criticise, since it is already the case that if you as a Dane have valuables for more than 10,000 kroner ($1,450, 1,340 euros) it may be required that this is sold before you can receive unemployment benefits,” she added.
Stojberg, an immigration hardliner of the ruling right-wing Venstre party, added that “in Denmark you have to try for yourself if you can.”
Items of personal significance, such as wedding rings, as well as mobile phones will be exempt, according to the government's proposal.
The plans have sparked international outrage, especially in the US, where the Washington Post on Thursday noted that confiscating jewellery from refugees had “a particularly bitter connotation in Europe” where the Nazis seized gold and valuables from Jews and others during the Second World War.
Danish Prime Minister Lars Lokke Rasmussen, whose government rules with the backing of the anti-immigration Danish People's Party (DPP) in parliament, accused the media of painting “an incorrect picture of Denmark.”
Many Americans simply do not understand how generous the Danish welfare state is, he told Danish journalists in Brussels, according to daily Politiken.
“It is in that context you should understand that we in Denmark say that before you get these welfare benefits you must, if you have a fortune, pay yourself,” he said.
Compared to neighbouring Sweden, Denmark has seen a relatively modest rise in asylum applications this year, after shortening residence permits, delaying family reunifications and placing adverts in Lebanese newspapers to discourage refugees.
Url copied to clipboard!