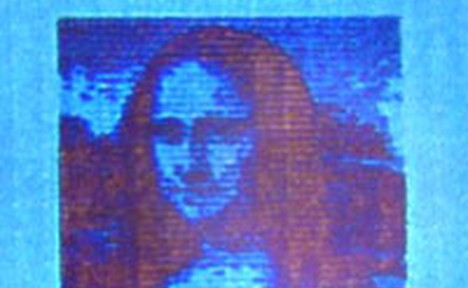 DTU Nanotech and DTU Fotonik printed a microscopic Mona Lisa just 50 micrometres long. Photo: DTU Fotnik
The tiny Mona Lisa would cover less than one pixel on a smartphone display.
Researchers at the Technical University of Denmark (DTU) constructed the printer, which requires a special nanoscale-structured surface consiting of rows with small columns with a diameter of merely 100 nanometres each. It is then covered by 20 nanometres of aluminium.
Laser beams are then transmitted from column to column, emitting heat of up to 1500C. The intensity of the laser beam determines which colours are printed on the surface, since the extent to which the nano columns are deformed decides which colour is reflected.
“Every time you make a slight change to the column geometry, you change the way it absorbs light. The light which is not absorbed is the colour that our eyes see. If the column absorbs all the blue light, for example, the red light will remain, making the surface appear red,” said Professor N. Asger Mortensen from DTU Fotonik.
The laser technology can print at a resolution of 127,000 dots per inch (DPI), while ordinary weekly or monthly magazines are printed in a resolution equivalent to 300 DPI.
Researchers say the technology will make it possible to print high resolution images. These cannot be detected without a microscope or other specialized equipment.
“It will be possible to save data invisible to the naked eye. This includes serial numbers or bar codes of products and other information,” Anders Kristensen said in a press release.
“The technology can also be used to combat fraud and forgery, as the products will be labelled in way that makes them very difficult to reproduce.”
The new technology can also be used to produce interactive decorations on consumer objects such as mobile phones. The car industry has also taken a keen interest, as the technology could simplify the production of instrument panels and buttons.