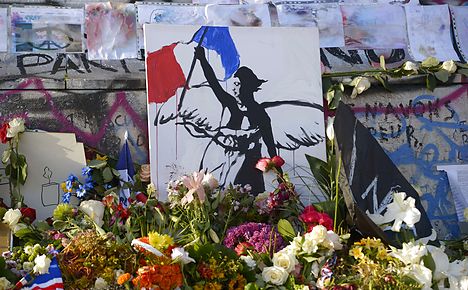 A photo taken on November 26, 2015 shows flowers and artwork left at a makeshift memorial at Place de la Republique in Paris, in memory for victims of the November 13 terrorist attack, which resulted
Berlingske newspaper reported on Friday that a Danish citizen who fought alongside the terror group Isis had connections to the Paris terror attacks of November 13th.
The man was allegedly killed by a drone attack on December 7th in the Syrian capital of Raqqa, according to the group Raqqa is Being Slaughtered Silently, which said that the Dane was driving in a BMW with a high-ranking member of Isis when their vehicle was hit by the drone strike.
The man was identified by Berlingske by only the initials R.T. but he also allegedly used the false name Abu Maryam al-Kurdistani. Raqqa is Being Slaughtered Silently, which takes on Isis by publicly releasing information the terror group would rather keep silent, identified the man by name in this tweet.
“We are positive that R.T. is dead. He knew every single detail in the Paris attacks and was in contact with some of the perpetrators both before and after the attacks,” a Raqqa is Being Slaughtered Silently member told Berlingske.
The person in question was a Danish citizen of Kurdish-Iraqi background who worked as an engineer.
Neither the Danish Security and Intelligence Service (PET) nor the Danish Foreign Ministry had commented on the report as of Friday morning.