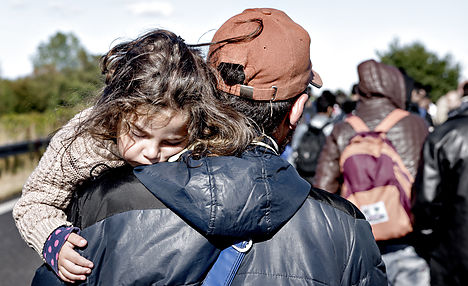 The government ran the ads after refugees began arriving in large numbers in September. Photo: Bax Lindhardt/Scanpix
The Danish government may have misled Syrian refugees when it took out advertisements in Lebanese newspapers to warn off migrants, a supervisory body said on Thursday.
The adverts could have given Syrian refugees “an incorrect view of what their situation would have been in Denmark,” said parliamentary ombudsman Jørgen Steen Sørensen, who ensures that public authorities comply with the laws and other statutes governing their actions.
“The advertisement could very easily have made them decide where to seek asylum on the wrong basis,” he said in a statement.
See also: Denmark's anti-refugee ads under investigation
Parts of the advert highlighted rules that were largely irrelevant for Syrian refugees, such as the possibility of asylum seekers being “sent home quickly,” he noted.
Denmark currently only rejects around two percent of Syrian asylum claims.
“It is also highlighted that you as a refugee risk having your residency withdrawn. But in practice this has happened very rarely, and certainly not to Syrian refugees,” Sørensen said.
Denmark's Venstre government, which relies on parliamentary support from the anti-immigrant Danish People's Party, placed the adverts in three Arabic-language newspapers and one English-language daily in Lebanon on September 7.
The adverts also highlighted that social benefits for newly-arrived refugees had been slashed by half and that family reunification is not allowed for the first year after they arrive.
See the English ad in full here:

Integration Minister Inger Støjberg said she disagreed with the watchdog's criticism and said she planned to advertise again, this time about Denmark's latest measures to deter refugees from coming, which include police searches of their luggage for valuables and cash.
“It could be newspaper adverts, but I will probably use social media even more than before,” she told news agency Ritzau.
The government's ad campaign was highly controversial within Denmark and spurred not one but two counter campaigns.
See also: Danes publish refugee 'apology' ads in Lebanon
Denmark has some of Europe's strictest immigration laws and has received far fewer refugees this year than neighbouring Sweden, Norway and Germany have.
On November 9th, the number of asylum claims registered this year stood at just under 15,000, around a tenth of the number in Sweden, which expects to receive up to 190,000 refugees this year. Norway, with a population similar to Denmark's, will receive some 30,000, while Germany recently announced that its refugee numbers hit one million this year.