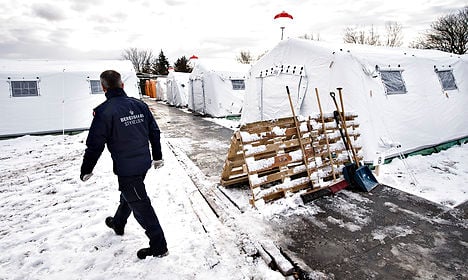 Three new tent camps, of the same type as the one currently housing 250 asylum centres in Thisted, will be located in Næstved, Herning and Haderslev, according to a ministry statement released on Tuesday.

The ministry also announced plans to build a new ‘departure centre’ near Ikast, in which temporary accommodation will be provided for up to 600 rejected asylum applicants as well as those granted asylum but later deported due criminal convictions.

“I believe that we have found a good solution for a pressing problem. Those persons who do not have the right to asylum can be placed in secured accommodation, from where they can be deported as quickly as possible,” Integration Minister Inge Støjberg said in a statement.

“It also sends a clear message to criminals and otherwise ejected persons that the government does not want them in Denmark,” she added.

In addition to the tents and departure centre, a number of shed-like structures in a so-called ‘barracks’ will be built at the new facilities in Herning and Haderslev in order to house families. This represents the first time families will not be accommodated in normal buildings.

Family reunification wait affects only few
In other asylum news, Politiken newspaper reported on Wednesday that despite the government's plan to increase the waiting period for family reunification from one to three years, the effort would, in fact, only apply to around 20 percent of reunification applicants.

While the government is able to enforce the prolonged waiting time on normal asylum seekers – for example those claiming asylum on the basis of the dangers of civil war in their homeland – many Syrian asylum seekers qualify for the international ‘convention status’. This means they are able to cite further threats to their wellbeing, specifically being called up for military service.

The government is unable to apply its reunification rules to refugees with convention, rather than normal asylum, status.

According to records since February this year – when restrictions put into place by the previous government began to differentiate the two statuses – only 809 of 3,831 asylum applications did not qualify for convention status.

Both the government and the anti-immigration Danish People’s Party (DF) have expressed disappointment with the apparent limitations of the recent tightening of family reunification rules.

“We would like the restrictions to also apply to convention refugees,” DF spokesperson Martin Henriksen told Politiken.

“This is not because it is our wish,” said Morten Knuth of the governing Venstre party. “We are bound by the conventions. We are of the opinion that we will do everything we can [to tighten the rules] while remaining within the limits of the conventions.”