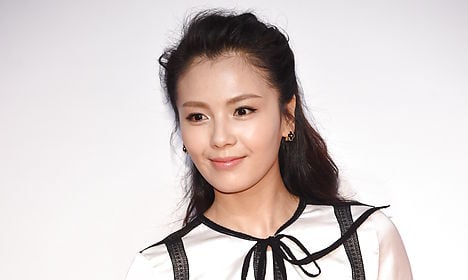 Chinese actress Liu Tao said her hotel safe was stolen. Photo: Zhu Ying/Scanpix
Actress Liu Tao, who has starred in dozens of television series and a handful of films, made an unscheduled trip to a Copenhagen courtroom on Tuesday after she was the victim of a theft while visiting the Danish capital as part of a promotion with Danish shoe company Ecco.
The 37-year-old star had a safe stolen from her room at First Hotel Kong Frederik in Copenhagen along with all of the valuables inside.
“The safe in my room and everything in it has simply been stolen. Inside there was jewellery and a watch worth four million [Chinese yuan – 4.3 million kroner, $620,000] and some cash. The entire safe was stolen. This is terrible,” the actress wrote according on the Chinese social media site Weibo, according to TV2’s translation from Chinese.
In the early hours of Tuesday, Copenhagen Police announced on Twitter that a 33-year-old man had been arrested for the robbery as he attempted to leave Denmark via ferry at Rødbyhavn.

At a court appearance on Tuesday morning, the 33-year-old man, a Polish national, admitted to the theft.
Among the items stolen from Liu Tao were a Bulgari watch, a ring shaped as a horse's head, a diamond ring from Tiffany's and Chinese cash amounting to around 7,000 kroner. In total, the heist had an estimated value of four million kroner.
The man told the court that he broke into the room, swiped the safe and then went and opened it near one of Copenhagen's lakes.
“Even though I carried out this action, I don't want to hurt anyone. I know what I did and I am very ashamed and regret it deeply,” the man said in court via an interpreter, according to TV2.
Liu Tao was originally scheduled to return to China on Tuesday but attended the court hearing along with seven others.
Ecco, which was using Liu as a “brand ambassador” to appeal to the Chinese market, apologized for the incident.
“We’re deeply sorry that our brand ambassador had to experience such a thing. She was in Copenhagen in connection with a photo shoot that will be used for our summer collection to be presented in the spring. Liu Tao is one of the biggest names in our campaign,” an Ecco press officer told TV2.