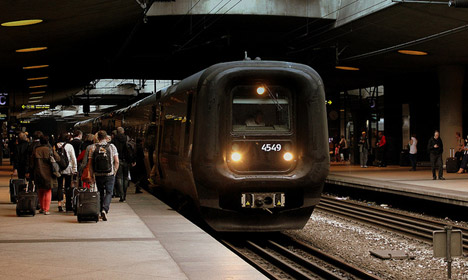 The controls would cause delays of up to an hour. Photo: Calflier001/Flickr
New Swedish plans to try to further limit the number of asylum seekers arriving in the country are expected to be approved by parliament and would come into force on December 21st, just days before the Christmas holiday.
Under the new plans, all Sweden-bound trains will be stopped at Copenhagen Airport (Kastrup Station) and passengers will be subjected to mandatory checks. The trains will be emptied at the airport platform and all passengers will need to enter the terminal to show their identification papers before being allowed to return to the platform and re-board the train.
Danish citizens are advised to have valid a driving licence or CPR card, Swedes should carry their identity cards and non-citizens should have a valid passport.
A train journey between Copenhagen and the southern Swedish city of Malmö usually takes around 30 minutes, with tens of thousands of commuters using the busy route daily. However, regional transport operator Skånetrafiken warned that the mandatory ID checks could cause delays of up to an hour.
The airport checks will be carried out by a private company hired by Danish rail operator DSB, while Swedish police officers will do a second round of controls when the train reaches Malmö.
The head of regional public transportation authority Skånetrafiken said the new process will have a negative impact on the relationship between Denmark and Sweden.
“It’s obvious that many people will choose to drive instead and that will hurt the integration of the Øresund region,” Linus Eriksson told Berlingske.
Swedish police have already been carrying out spot checks in Malmö of people crossing the Øresund Bridge – made famous by the Nordic Noir television series 'The Bridge' – into Sweden since the government moved to stall the influx of refugees in mid-November.
As The Local reported on Thursday, the proposal, if approved, would also give the government the authority to close the Øresund Bridge to road traffic in extraordinary circumstances, without going through parliament.
“We have not yet been in a situation where we have judged that that would be needed,” Sweden’s infrastructure minister, Anna Johansson, told the TT newswire on Friday.