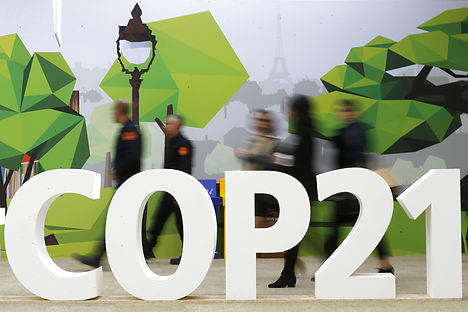 Denmark received its dubious honour on day four of the climate talks. Photo: Stephane Mahe/Scanpix
The NGO umbrella organization Climate Action Network (CAN) on Tuesday named and shamed Denmark for “undermining ambition” by lowering its climate ambitions and slashing green spending.
“In the not too distant past Denmark was an inspiration for many – setting ambitious targets and rolling out wind energy. But today we are not talking about great Danes, we are talking about lame Danes, because today the Danish government are aiming to cut climate targets and shrink climate finance contributions,” CAN wrote in a press release.
The organization awarded Denmark with the ‘Fossil of the Day’ prize, getting onlookers to chant “lame Danes”:
“While looking to cut their own ambition, the Danish government also seems to want to restrict the ambition of less wealthy nations too. The new government has a steady stranglehold on climate finance – squeezing the budget from an initial 500 million Danish kroner, which is around $72 million, to a projected 39 million US dollars next year. That is hardly enough to buy a coffee in Copenhagen!,” CAN continued.
See also: Denmark looks to lower its climate goals
When Climate Minister Lars Christian Lilleholt announced the government’s plans to scale back national climate goals, several critics predicted that, as a perceived world leader, Denmark’s move would be noticed at the COP21 talks.
Now that climate organizations have indeed taken notice of Denmark’s new direction, a spokesman for Greenpeace Denmark said the award was fitting.
“It is fully earned that the government is now being called out for its pure duplicity in which [PM Lars] Løkke [Rasmussen] and Lilleholt make drastic cuts within the climate area in the domestic budget and then go to Paris in front of the international community and boast about continuing to be a front runner,” Jens Mattias Clausen told Information.
See also: Denmark: Greenwashing capital of the world
John Nordbo of WWF Denmark agreed.
“The rest of the world has seen through the Danish government’s spin. We are – although you wouldn’t know to hear the government give speeches abroad – no longer at the head of the climate class,” he said.
See also: Denmark slips down list of green countries
Rasmussen used his address at the COP21 talks on Monday to say that Denmark is setting an example to “inspire” others in the area of carbon dioxide (CO2) reduction while other countries are “not ambitious enough”.
Despite the government’s green budget cuts, however, Rasmussen announced an apparent U-turn by pledging 580 million kroner ($82m) for research into “clean energy” in the so-called 'Mission Innovation', a research funding initiative with both governmental and business investors, including high profiles such as Bill Gates and Mark Zuckerberg.