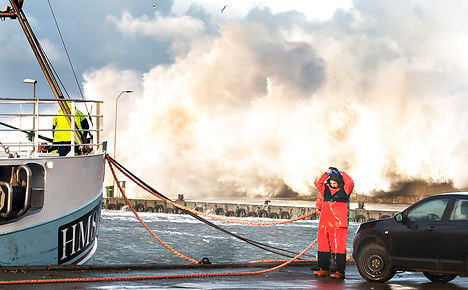 Helga comes just five days after Storm Gorm made landfall. Photo: Henning Bagger/Scanpix
The Danish Meteorology Institute has warned western and northern Jutland that hurricane-strength winds will pound the area on Friday.
The storm, which DMI dubbed 'Helga', was set to strike Jutland early on Friday morning. Northern Jutland is expected to get it worst with winds predicted to exceed the 117kph necessary to officially considered hurricane-strength.
The entire west coast of Jutland was warned to prepare for storm-strength winds between 86-97kph.
The hurricane warning for northern Jutland is in effect until 1pm, while the storm warning on the west coast will be lifted at 12pm.
Helga comes just days after Storm Gorm pummelled Denmark, leaving downed trees in its wake and causing numerous bridge closings and public transport delays.
DMI has warned that Helga could also result in falling branches and flying tiles in northern Jutland.
DMI came up with the names Gorm and Helga according to an international convention by which storms are named in alphabetical order, alternating between boys’ and girls’ names.
Helga is also likely to bring havoc to Sweden.