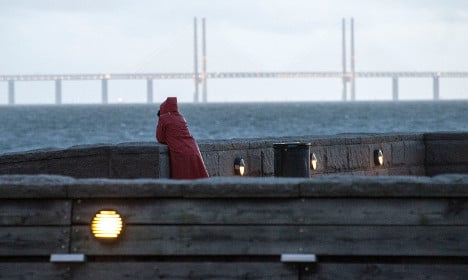 The Öresund Bridge between Sweden and Denmark. Photo: Johan Nilsson/TT

Sweden's Dagens Industri (DI) newspaper was first to cite a proposal being worked on by the government, which outlines measures to cope with Sweden's unprecedented intake of asylum seekers.

“The Öresund Bridge is one of Sweden's most important and busiest connections to another country, Denmark,” it quoted the document as saying.

“A temporary closure of the bridge can provide another measure to reduce the risk that public order or internal security is affected as a result of the large influx of asylum seekers.”

The document has apparently been handed to the Swedish Council on Legislation, which examines the legal validity of legislative proposals before they go before parliament.

“The number of asylum applications continues to be at a level that makes the situtation such that from a broad perspective a serious threat to public order and internal security in Sweden remains,” it adds, according to DI.

Famous from the Nordic Noir television series 'The Bridge', more than 30,000 car commuters use the combined road and rail crossing between Malmö and Copenhagen in the two countries every day. It is however understood train travellers would not be affected by a potential closure.

“If you close the bridge once you obviously start to wonder if it's going to happen again. In the long run it can hit Malmö hard because people are dependent on getting to work on the other side of Öresund,” Britt Andresen, chief analyst at the Öresund Institute, told the newswire.

The proposal would give the government the authority to close the busy connection, bypassing parliament.

“It is not an issue at present, but this bill, if passed, would give the government an opportunity to in an emergency close the bridge without having to go through parliament, which would take too long,” Infrastructure Minister Anna Johansson's press secretary Elin Tibell told DI on Thursday.

READ ALSO: Why do refugees prefer Sweden to Denmark? It was not immediately clear how Denmark would react to the proposal. The country has been taking a tougher stance on asylum claims than Sweden, but also criticized its neighbour's introduction of border controls in November.

Sweden stepped up its immigration checks after announcing that it could no longer guarantee accommodation to all refugees arriving in the Scandinavian nation. Since then, the number of new migrant arrivals has dropped by a third, according to Sweden's migration agency.

However, more than 80,000 people have applied for asylum in Sweden in the past two months alone, which would be the equivalent of 25 million asylum seekers for the entire EU, Swedish Prime Minister Stefan Löfven said last week.

The leader made the comments after announcing that Sweden would drastically tighten its asylum rules, no longer guaranteeing permanent residency to successful applicants.

He also flagged at the time that the government wanted to introduce ID checks on all train passengers and road users crossing the bridge, which public transport companies warned could lead to delays of up to an hour.