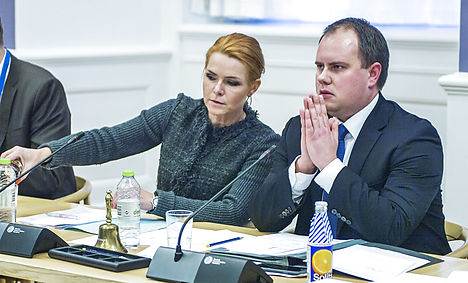 Two Danish politicians have been the subject of criticism for saying that they support the notion of confiscating valuable items from refugees in order to support the costs of providing them with asylum.

Justice Minister Søren Pind said on the TV debate show 'Vi ses hos Clement' that he could see certain situations in which it would appropriate to confiscate valuable items.

Pind went on to praise Denmark’s management of the refugee crisis, claiming that the country had coped well with the estimated 18,000 asylum seekers it has received thus far in 2015. The minister said that he “did not know” how many of these were carrying cases of diamonds.

Martin Henriksen from the anti-immigration Danish People’s Party (DF), responded to Pind’s comments by saying that they did not go far enough, and that even wedding rings should be considered for repossession.

“Søren Pind is telling stories. He says that the police should only confiscate diamonds from refugees, but in our negotiations [regarding new asylum laws] we have also discussed cash and smaller valuables. At no point have we said that we should only confiscate large amounts of cash or diamonds, and it worries me that the minister of justice says such things,” Henriksen told BT.

Leader of the green Alternative party Uffe Elbæk, writing on Facebook, pointed out the absurdities of Henriksen and Pind’s arguments,

“If you have a suitcase full of diamonds, you would choose a better form of transport than [a boat] across the Mediterranean, putting your life at risk. Refugees bring nothing more than the few personal belongings they can. Are these really the things DF want to take from refugees in Denmark? I don’t know whether to laugh or cry,” he wrote.

Foreign Minister Kristian Jensen of Venstre also went to Twitter to shoot down the idea.

“No, we shouldn't strip wedding rings off the fingers of asylum seekers who come to Denmark,” he wrote.

Henriksen later clarified his comments on Radio24syv, stating that the confiscation of wedding rings “is not something that we should strive for” but “could be fair enough in some situations, even though they would be exceptional.”