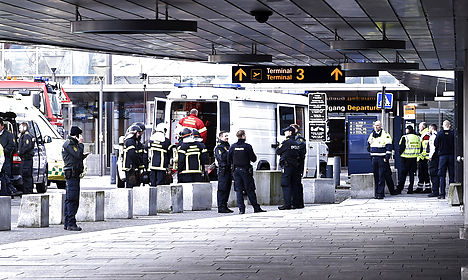 Not funny: The joke led to a large-scale evacuation. Emil Hougaard/Scanpix
Two Greek nationals who have been jailed since their November 19th ‘joke’ about having a bomb in the Copenhagen Airport were released from custody on Wednesday but the Copenhagen City Court confiscated their passports and told them to remain in Denmark.
The men, aged 33 and 65, are being charged with violating Article 266 of the Danish Penal Code, which deals with the incitement of fear through the threat of carrying out an illegal action.
See also: Copenhagen Airport bomb 'jokesters' jailed
One of the Greeks is top executive in several European companies and previously held a position at the prestigious US university Harvard, Ritzau reported.
The man’s lawyer said he was willing to pay a 750,000 kroner bond, and both defendants have argued that the detention has has had a major impact on their professional careers.
Mikael Bernhoft, a lawyer representing one of the two men, said they were “not the type of clientele we typically see here in the court” in arguing unsuccessfully for their unconditional release with a financial guarantee that they would return to Denmark for trial.
“This is a very unfortunate case of a joke that came at the worst possible time,” Bernhoft said in court.
The men were checking in to their flights on November 18th, just five days after the terror attacks in Paris that killed 130 people.
See also: Copenhagen Airport emptied over bomb joke
According to police, when one of the men set his suitcase on the luggage belt he said that it contained a bomb. A female airport employee told the men that it wasn’t appropriate to joke about such a thing. The worker then set off an alarm when the men attempted to keep the so-called joke going by saying that one of them was a wanted terrorist from the Paris attacks and then saying the word ‘Salaam’, Arabic for ‘peace’.
Police responded to the employee’s alarm in large numbers and evacuated hundreds of people from Terminal 3. The evacuation lasted over two hours and halted public transport to the airport.
The two Greeks face additional charges for delaying at least 14 flights with their so-called joke.
A verdict is expected before Christmas.