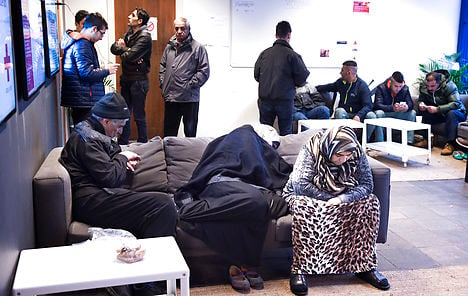 Asylum seekers at the Red Cross facility in Auderød. Photo: Jens Nørgaard Larsen/Scanpix
According to Jyllands-Posten, at least 4,500 people sought asylum in Denmark in November, which would easily eclipse the all-time record set in October, when 3,646 asylum applications were submitted.
The vast majority of those applications are likely to be approved, as official figures from the Danish Immigration Service (Udlændingestyrelsen – DIS) released on Monday showed that 86 percent of asylum seekers are allowed to stay in Denmark, a sharp increase from the 74 percent approval rate in 2014.
Andreas Kamm, the general secretary of the Danish Refugee Council, said that Sweden’s recent decision to tighten its asylum rules has likely contributed to Denmark’s increase.
“It is impossible to know precisely, but the strong signals from Sweden that one can’t expect to find housing and the tightening of the screws, which Denmark has also done, has an effect,” Kamm told Ritzau.
“With the communications channels that Syrians and Middle Eastern refugees in particular have – mobile phones and so on – they have a better idea of what is going on than what we are accustomed to,” he added.
Through the end of October, 13,425 people have applied for asylum in Denmark this year and 9,156 have been approved. In all of 2014, there were 14,815 asylum applications and 6,104 approvals.