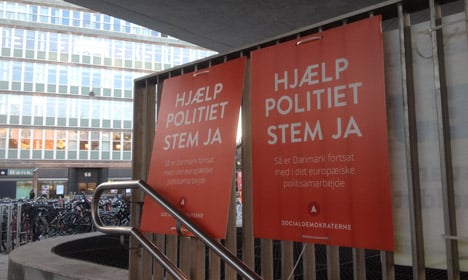 The 'yes' camp has been accused of running a scare campaign. Photo: The Local
Held three weeks after the Paris attacks that left 130 people dead, the referendum was originally scheduled to take place in 2016 but was moved up so it wouldn't interfere with the campaign for Britain's EU referendum, due to be held before 2017.
A majority of left- and right-wing parties in the Danish parliament approved the principle of a referendum in December 2014, despite the opposition of the eurosceptic, anti-immigration Danish People's Party (DF).
The party, which emerged as the country's second-biggest in June legislative elections, has held significant sway over Danish politics for more than a dozen years, providing right-wing minority governments with support to pass legislation in parliament in exchange for its tighter immigration policies.
“More EU? No thanks,” read DF's campaign posters.
The party claims Denmark risks losing control over its immigration policy, a strong argument for voters worried that Denmark could be forced to accept obligatory EU refugee quotas in the future.
The number of asylum seekers in Denmark has only been about a tenth of those received by neighbouring Sweden so far this year.
See also: Paris attacks push Danes toward EU justice rules
'Help the police: vote yes!'
The “yes” camp, led by Prime Minister Lars Løkke Rasmussen of the right-wing Venstre party as well as the opposition Social Democrats, has meanwhile been accused of scaremongering, with a campaign slogan that reads: “Help the police: vote yes!”
On its website, the Socialist People's Party has published a photo of French President Francois Hollande at the Bataclan theatre in Paris on November 13, after 90 people were killed there.
“The refugee crisis, cross-border terrorism, human trafficking and social dumping are challenges we cannot overcome on our own,” it said.
The “yes” and “no” camps are currently running neck-and-neck, with one recent poll showing that one in five Danes were more likely to vote “yes” after the Paris attacks.
But the large number of undecided voters — estimated at between 20 and 30 percent — has made the outcome impossible to predict.
“I expect to vote yes. I'm generally in favour of integrated police cooperation,” said Pelle Jacobsen, a 38 year-old web analyst.
“I think I will vote no,” said 25-year-old university student Frederikke Jars.
“We can't take back a 'yes' completely, but we can always vote about it again later,” she added.
Reluctant EU member
Denmark has been a reluctant member of the EU since joining in 1973.
After Danish voters rejected the Maastricht Treaty in June 1992, Copenhagen was granted opt-out clauses on the euro, defence, and justice and home affairs.
These exemptions allowed the government to hold another referendum one year later, in which Danes finally said “yes”.
The arrangement allowed Denmark to maintain its strict immigration policies while participating in other areas of judicial cooperation.
As such, Denmark is a member of Europol, the intergovernmental European agency used in the fight against organized crime, trafficking and terrorism.
See also: Europol: What's in it for the Danes?
But following 2009's Lisbon Treaty, Europol will next year become a supranational agency — controlled by EU justice and home affairs ministers — meaning Denmark would have to leave the organization due to its opt-out.
If it wants to remain a part of Europol, it needs to scrap the opt-out.
But doing so does not mean that Denmark has to be part of all EU justice policies.
Rather, the referendum proposes an “a la carte” solution similar to that used by Britain and Ireland.
With a “yes”, the Scandinavian country would “opt in” to Europol participation and 22 legal acts covering subjects like European cybercrime, human trafficking, child pornography and fraud.
The complexity of EU justice policies means almost two-thirds of Danes were unable to explain the vote in a poll published on November 3rd, and daily Politiken recently described it as “a referendum that makes the voters' eyes glaze over.”
Asked about Europol, one undecided voter answered: “What's that again?” 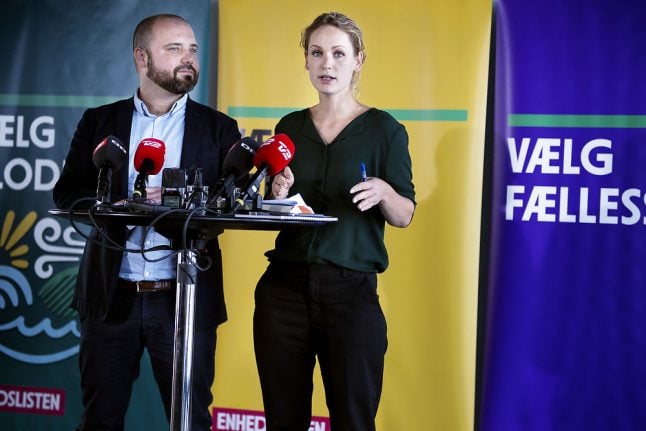