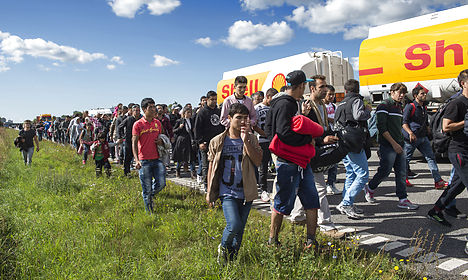 Denmark received nearly as many asylum seekers in October as it did in all of 2011. Photo: Jens Nørgaard Larsen/Scanpix
Official DIS figures released on Monday confirmed that October set an all-time asylum record in Denmark with 3,646 applications.
With only two exceptions, the numbers increased month after month in 2015 and October’s total alone represents more asylum applications than Denmark received in all of 2011.
With the new applications in October, it looks almost certain that this year will top the 2014 totals, when 14,815 people sought asylum. That number represent a near doubling of 2013 totals and an almost fourfold increase over 2009, when just 3,855 asylum seekers came to the country.
Syrian asylum seekers were by far the largest group, with 1,459 Syrian applications processed in October. In 2014, Syrians accounted for just under half of all asylum cases.
Although Denmark recently implemented its third round of restrictions within the asylum area, the anti-immigration Danish People’s Party (DF) used the new figures to accuse the government of “doing nothing”.
See also: Government criticized for fast-tracking asylum laws
“It is incomprehensible that a party and a minister who campaigned on limiting the influx do nothing with the asylum figures rise and rise,” party spokesman Martin Henriksen told Politiko.
While Denmark is likely to see 2015 be another record year for refugees, the influx is still nowhere near what its two neighbour countries are experiencing. Germany expects at least 800,000 refugees, with some reports saying the number could reach 1.5 million, while Sweden's Migration Agency says it expects up to 200,000 refugees by the end of the year. Norway expects around 30,000 refugees and recently announced a series of restrictions to try to cut the number.