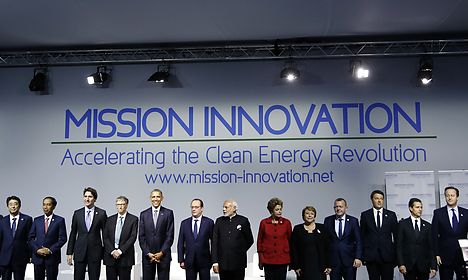 Denmark is setting an example to “inspire” others in the area of carbon dioxide (CO2) reduction while other countries are “not ambitious enough”, Danish Prime Minister Lars Løkke Rasmussen said at the COP21 climate summit in Paris on Monday.

Despite the PM's claims, however, new reports from the World Energy Council (WEN) and Statistics Denmark suggest a somewhat different reality.

The WEN report, which is based on measures of CO2 emissions, efforts to halt climate change and the prevalence of green forms of energy supply has placed Denmark at number six in its ranking of sustainable energy countries – Denmark's second drop in two years, which puts the nation below both Norway and Sweden in the rankings.

“The rankings are relative, so this does not necessarily mean that Denmark is getting worse. Significant progress is being made around the world,” WEC chairperson Hans Hvidtfeldt Larsen told national broadcaster DR.

An analysis of CO2 emissions by Statistics Denmark appears to support the conclusion that Denmark is lagging in its progress towards green energy use. Although the statistics show a 21 percent reduction in emissions between 1990 and 2013, according to the definition provided by the UN Climate Panel, these do not take into account emissions from Danish shipping or from the production of Danish goods for transport into Denmark in third party countries such as China.

If figures from these are included, the picture looks significantly different, with the analysis showing a 23 percent increase from 1990 to 2013.

Meanwhile, the Danish government continued to stress the country’s leading role in the field at the COP21 meetings.

“This is an international initiative in which a number of countries have taken on greater responsibilities than they previously were willing to,” Rasmussen told DR, but underlined that the current overall commitment was “insufficient” to reach the stated UN target of a maximum global temperature increase of two degrees.

“Denmark has a traditionally strong position within green energy research, so it makes sense that we would be invited to participate [in Mission Innovation],” Energy and Climate Minister Lars Christian Lilleholt told DR.

In August, Lilleholt said that the previous government’s goal to reduce carbon emissions by 40 percent in 2020 compared to 1990 levels will be “very expensive” and “not what Denmark needs right now” and announced that the target would be reduced to a 37 percent cut.

Plans from Rasmussen's government to sink Denmark's green ambitions and cut green spending have been heavily criticized and political opponents seized on the PM's agreement to join 'Mission Innovation' to once again push him to change course.

“A big thanks to Obama, who managed what neither we, [controversial Danish environmentalist Bjørn] Lomborg or others could: to convince [Rasmussen's Venstre party] that it is crazy for both the climate and the Danish workforce to cut research in green energy,” former Foreign Minister Martin Lidegaard wrote on Facebook.

The current government, however, has defended its climate policies by saying that even with spending cuts and lowered ambitions for emission cuts, Denmark remains a world leader in green policies.

“We have taken on an aggressive and ambitious target,” said Rasmussen, referring to Denmark’s participation in the EU’s collective agreement to reduce CO2 emissions by 40 percent. “If other countries could be inspired by us, the world would be a different place.”

Also on Monday, the PM announced that Denmark would join 37 other countries in funding an initiative to remove state subsidies that artificially keep down the price of coal, oil and gas. Denmark will give 40 million kroner to the project.