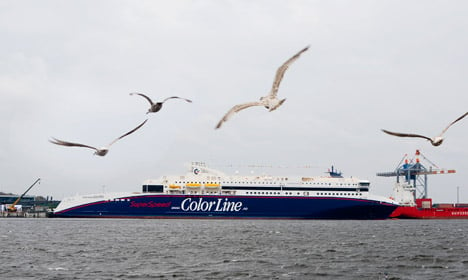 A Color Line spokesman said it was the first time the company had denied passengers over missing papers. Photo: Heiko Junge / SCANPIX
Four Syrians who wanted to seek asylum in Norway were turned away from a Color Line ferry that travels between the Danish port town of Hirtshals to the Norwegian town of Larvik on Thursday after stepped up Norwegian border controls took effect earlier in the day.
See also: Norway tightens borders after Sweden decision
“We did what we were asked to do – control identification and admission papers to Norway. If one cannot show that, they can’t travel,” Color Line spokesman Helge Otto Mathisen told Norwegian broadcaster NRK.
“They said they were refugees and wanted to seek asylum in Norway,” Mathisen added.
The four would-be asylum seekers had all purchased tickets for the ferry.
According to Mathisen, the denial of the Syrians marks the first time the operator has turned away would-be passengers for lacking the proper documents. It was not immediately known if the group would instead seek asylum in Denmark.
Norwegian PM Erna Solberg announced on Tuesday that her country would begin checking all ferries into Norway from Denmark, Sweden and Germany. Border controls at land crossings have also been increased.
Under the new increased controls, ferry operators are obligated to ensure that all passengers have legitimate travel documents before docking in Norway.
See also: Calls for stricter Danish asylum rules after Sweden move
Norway upped its border controls following Sweden’s announcement that it would significantly tighten its asylum rules. Denmark has said it will not implement any border controls, with Danish PM Lars Løkke Rasmussen arguing that doing so would result in more, not fewer, asylum seekers.
That was an opinion shared by Solberg as recently as a week ago, when she said it was a “misperception” that implementing border controls will bring down the number of asylum seekers coming to any given nation.