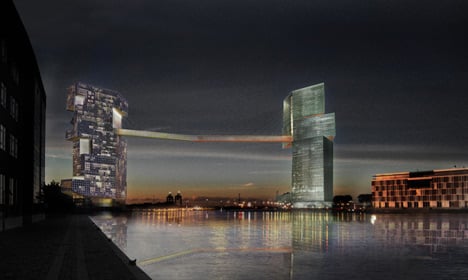 The cycling bridge will look cool, but you can't use it. Photo: Steven Holl Architects
A 65-metre high covered track connecting two towers above the Nordhavn harbour waters will not be open to Copenhagen residents or tourists, following city officials’ decision to allow the project’s developer to make the bridge private and not accessible by the public.
The bridge, designed by American architecture firm Steven Holl Architects and first approved in 2008 but put on ice due to the financial crisis, will connect two new towers on either side of the Nordhavn harbour at a height that will allow for daily docking and departures of massive Oslo-bound ferries.
See also: New Copenhagen cycle bridge 65m above water
According to Politiken, the 65-metre high bridge will still be built as planned but it will not be available to the public. Instead, planners are looking in to building an additional public bridge that may be able to raise or open to accommodate the ferry traffic.
“I think the original plan with a cycling connection at a height of 65 metres was problematic. Cyclists want to come from point A to point B quickly and therefore I fear that the route wouldn’t be used. It became too much of a prestige project and not the most practical solution for cyclists,” Copenhagen City Council member Jacob Hougaard told Politiken.
Hougaard, a Social Democrat, voted in favour of granting the developers’ request to make the bridge private. The city’s deputy mayor for technical affairs, Morten Kabell of the Red-Green Alliance (Enhedslisten) is against the privatization.
“The entire point with granting permission to two such spectacular high-rises on each side of the harbour was that there should be something given back to Copenhageners and that’s gone now,” Kabell told Politiken.
The developer, Harbour, defended the decision to close the bridge off to the public by pointing to practical and security challenges.
“I could talk all day about the security challenges in having 24-hour public access to a bridge 65 metres above ground. All sorts of bad things could happen,” spokesman Michael Nielsen said.
Construction of the project is expected to begin no later than 2017. And although Copenhageners won’t be able to use it, the bridge – dubbed the Copenhagen Gate – will join recent cycling infrastructure additions including Cykeslangen, the bridge that links Vesterbro and Islands Brygge, and Danish-Icelandic artist Olafur Eliasson's newly-opened Circle Bridge.
The 180-metre long Inderhavnsbro (Inner Harbour Bridge) connecting Copenhagen’s Nyhavn and Christianshavn districts is also slated to open in 2016 following a long series of delays and setbacks.