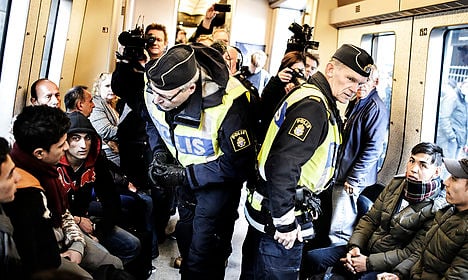 In the wake of Sweden's Tuesday announcement that it will implement a series of new measures to bring down the number of asylum seekers coming to the country, the anti-immigration Danish People's Party (DF) has warned that the new Swedish restrictions, coupled with its recently-implemented border controls, could make Denmark “a magnet for asylum seekers in Europe”.

Swedish Prime Minister Stefan Löfven on Tuesday announced a series of strict new changes that will see Denmark's neighbour only offer temporary residence permits to those refugees Sweden is obligated to help according to European Union and United Nations rules and conventions. Sweden will also limit the right to family reunification and enforce ID checks on all modes of public transport into the country.

The move came less than weeks after Sweden introduced temporary border controls, which Swedish immigration authorities say have dropped the number of daily asylum seekers from 1,500 to 900 .

Sweden's moves have prompted DF to demand a new round of discussions on tightened asylum and immigration laws in Denmark, despite the controversial new asylum laws that were fast-tracked through parliament last week.

“This should go straight to the negotiation table so that we can see whether the deal that is currently there is sufficient, or whether we should take things a step further,” DF leader Kristian Thulesen-Dahl told Jyllands-Posten.

Dahl’s party and centre-left opposition party the Social Democrats (S) have both voiced their support for the idea of 'immigrant villages', in which the government would provide sheltered accommodation for asylum seekers away from existing urban centres.

“It would send out the message that any stay in Denmark must be temporary,” said Dahl.

Social Democrat immigration spokesperson Dan Jørgensen told Jyllands-Posten that the Swedish development was another sign of the “need to relieve our country’s municipalities,” which are currently responsible for housing asylum seekers. 'Immigrant villages', in which no attempt to integrate asylum seekers into local communities would be made, are therefore a viable solution according to Jørgensen.

Minister for Integration Inger Støjberg said that it was too early to form any conclusions on the effectiveness of Swedish border controls on asylum applications in that country, despite having previously stated that this would mean “we will be forced to register people arriving here [in Denmark]”. The Danish government has no plans to introduce border controls, as PM Lars Løkke Rasmussen has repeatedly said that doing so would result in more, not fewer, asylum seekers.

Even with the new Swedish restrictions, Denmark's immigration rules are still far tighter than those of its Scandinavian neighbours, according to Martin Lemberg Pedersen of Copenhagen University’s Centre for Advanced Migration Studies.

Pedersen told broadcaster DR that while Sweden had now moved in line with minimum EU requirements for receiving refugees, Denmark's opt-out on EU Justice and Home Affairs grants it exemption from meeting the requirements and is thus able to maintain stricter laws on areas such as family reunification and residency permits.

Meanwhile, Norway also announced on Tuesday that it would be tightening its own border control, with all ferry arrivals from Denmark, Sweden and Germany subject to checks by Norwegian officials and increased controls at popular land crossings.

Norway also passed asylum reforms last week the deputy leader of the anti-immigration Progress Party said would compete with Denmark as “the strictest” in Europe.