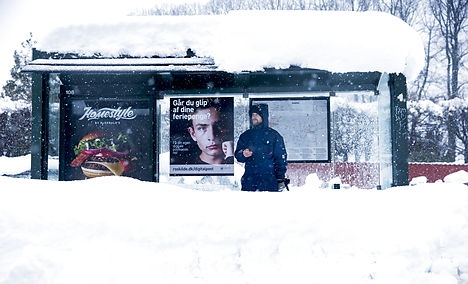 A man waits for a bus in Roskilde on Sunday. Transport problems were expected to continue on Monday. Photo: Jens Astrup/Scanpix
A cold Monday greeted Denmark after parts of the country received as much as 60cm of snow over the weekend.

The deepest snowfall was on the island of Zealand, where Roskilde residents reported at least 60cm of snow. The Copenhagen area received between 20-30cm.

3am in the #Copenhagen suburbs. Surely the biggest one-day snowfall of my five years in #Denmark. pic.twitter.com/gJPDQK04wf

Monday morning temperatures were measured as low as -8.8C in Aarhus and -6.3C in Roskilde and the Danish Meteorological Institute (DMI) said some parts of Denmark would remain below the freezing point for all of Monday. Zealand was expected to have the coldest Monday while other parts of the country could see temperatures reach up to 5C. Motorists help push a car off the road in Roskilde on Sunday. Photo: Jens Astrup/Scanpix
The cold temperatures were expected to give motorists troubles and the Danish Road Directorate (Vejdirektoratet) warned of slick road conditions throughout the country: Train travel was to be affected through much of Monday. Photo: Jens Astrup/Scanpix
Operator DSB said train traffic on Monday would be affected by the weekend’s snowfall and the ice-cold temperatures. The Copenhagen area and the rest of Zealand were to be the most affected by transport changes, with fewer trains running on the island. Train traffic was expected to be affected until at least 1pm on Monday and DSB is informing commuters of the situation on its website.