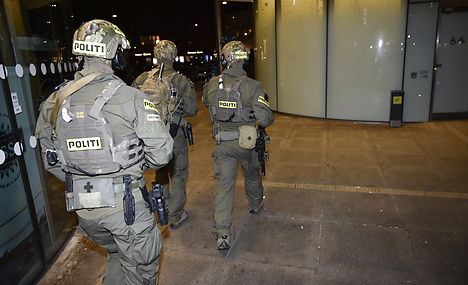 Police patrolled both Nørreport and Østerport Stations. Photo: Asger Ladefoged/Scanpix
Copenhagen Police closed down Nørreport Station for around an hour on Friday night as special action officers investigated a concerned resident's report that turned out to be a false alarm.
Shortly after 8pm on Friday night, Copenhagen Police sent its Special Intervention Unit (Politiets Aktionsstyrke – AKS) to Nørreport Station, the busiest transport hub in Denmark, to investigate what it called a “suspicious situation”.

Train and Metro traffic was halted as police wearing body armour and carrying weapons patrolled the station. Bomb-sniffing dogs and at least one officer wearing protective bomb gear were also on the scene.

Officers evacuated Nørreport’s platforms and blocked further access to the area. Passengers were told to leave the area and take buses instead.
By 9pm, Nørreport was open again and police officers had moved on to nearby Østerport Station, which was also temporarily closed to traffic. Police at Østerport Station. Photo: Bax Lindhardt/Scanpix
Police told the Ritzau news agency that it received reports of three masked men spotted at Nørreport at around 8pm.
The three men were found at Østerport Station and police said that nothing illegal was suspected and that the men were wearing masks because of the weather:

According to media reports, a number of people reported receiving identical text messages saying that the Danish Security and Intelligence Service (PET) had been warned that a terror attack would target Nørreport on Friday night. Neither PET nor police have commented on the messages and their content has not been verified.
Friday night’s incidents at the train stations came just two days after another “suspicious situation” shut down part of the Copenhagen Airport. That turned out to be two Greek businessman who joked about having a bomb. The men remain in police custody.
Earlier this week, the Danish National Police raised its threat level to its second-highest level.