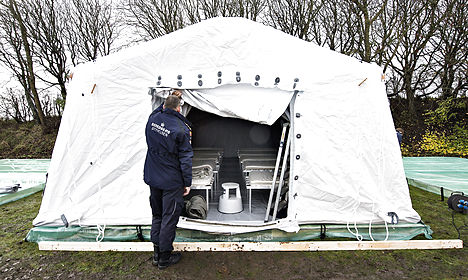 Denmark's first refugee tent camp prepares for its first residents. Photo: Henning Bagger/Scanpix
A tent camp for some 250 asylum seekers in the northern Jutland city of Thisted could open as early as this weekend, a spokesman for the Danish Emergency Management Agency (Beredskabstyrelsen – DEMA) said.
The tents are being erected at a DEMA centre and an additional 168 asylum seekers will be put in the centre’s existing buildings.
DEMA spokesman Peter Kragh told Ritzau earlier this week that the agency has nearly finished its preparations but it will ultimately be the Danish Immigration Service (Udlændingestyrelsen – DIS) that decides when the asylum seekers will move in to the nation’s first tent camp.
See also: Denmark to erect tents, shorten refugee permits
“We promised that it would take a week to establish the tent camp so throughout the course of the weekend the tents should be ready,” he said.
The plan is to put single male asylum seekers in the tents, where they will be given a folding bed, a mattress and a sleeping bag. It is up to DIS to decide if families will be housed in the DEMA buildings and the immigration agency will also be the one to select the asylum seekers for the tents. 250 single males will be put in the tents. Photo: Henning Bagger/Scanpix
The tent camps prepare to open as Denmark has upped its estimate for the expected number of asylum seekers in 2016 from 15,000 to 25,000. That increase was used in the government’s recently-approved budget to justify cutting the nation’s development aid from 0.87 percent of its gross national income to 0.71 percent, with up to one third of the funds to be used internally on refugees and asylum seekers in Denmark.
See also: Denmark's budget aids elderly and car buyers
A senior researcher with the Danish Institute for International Studies, Lars Engberg, told Politiken that the government’s plan represents “the most significant cut of development aid ever”.
According to the newspaper’s calculations, Denmark will spend 15 billion kroner on development aid in 2016, but 4.4 billion of that figure will be spent on refugees within the country.
“Residents have been told that development aid should support people in the world’s poorest countries. The question is whether we should even continue to call it development aid when so much of it will be used on refugees here in Denmark,” Engberg said.
The government's plans were also criticised from abroad, with international anti-poverty group ONE calling the move “a step backwards for a country which normally leans forward on development”.
“This decision by the government both to cut and to divert aid is misguided. Denmark has become the largest country recipient of its own aid. These funds are intended to help the developing world,” ONE spokeswoman Diane Sheard said.
“Cutting promised levels of aid not only risks the lives of the world’s poorest, it removes Denmark’s position as a leader in the global fight against extreme poverty,” she added.
See also: Danish NGOs slam aid cuts in budget proposal
The government’s increase in its estimate for the number of refugees that Denmark will accept next year was included in an early version of its budget but was removed under pressure from the anti-immigration Danish People’s Party (DF).
“In connection to these [budget] negotiations, we don’t want to take responsibility for some sort of specific asylum figure. The government must be responsible for that […] it is the government’s responsibility so it shouldn’t be included in the budget,” DF spokesman Peter Skaarup told Jyllands-Posten.
Denmark expects to receive 20,000 refugees in 2015.