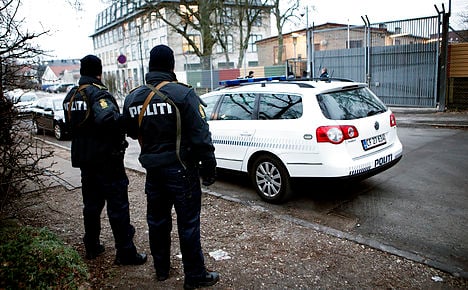 Danish police have been asked to be on the lookout for a man suspected of plotting terror in Sweden. Photo: Linda Kastrup/Scanpix
PET said on Thursday that it is working with the Swedish intelligence service Säpo to help find an Iraqi man suspected of “planning a terrorist act” in Sweden. Swedish officials say the man is somewhere in Scandinavia.
“PET can confirm that Danish police have received a photo of the wanted man. There is no concrete information on the man’s whereabouts so the Swedish authorities have therefore asked Danish police to be on the lookout,” PET spokeswoman Amalie Mathiesen told broadcaster DR.
Read more on The Local Sweden
The Danish National Police's investigative unit NEC has also been briefed by Swedish officials.
A press spokesperson for Sweden’s national operative police (NOA), confirmed to The Local that a grainy image of the man circulating in Swedish media had been distributed to police officers.
According to Swedish newspaper Expressen, the suspect is a member of Isis and is, or has been, in Sweden after spending time in Iraq, Syria and Germany.
Swedish public broadcaster SVT said it had information suggesting that the suspect is 25 years old and of Iraqi descent and had “some form of connection to Sweden”. The news network said it also understood that the man had fought for Isis in Syria.
At a press conference on Wednesday, Säpo said that the man had been arrested in absentia.
Also on Wednesday, both Denmark and Sweden raised their national alert levels.